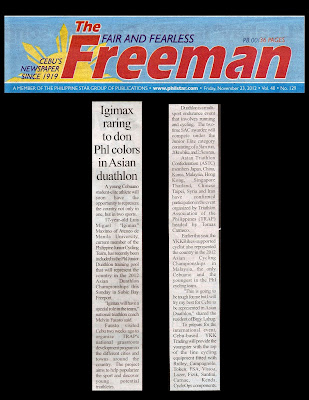 A young Cebuano student-elite athlete will soon have opportunity to represent the country not only in one, but in two sports.


17-year old Luis Miguel "Igimax" Maximo of Ateneo de Manila University, current member of the Philippine Junior Cycling Team, has recently been included in the Phl Junior Duathlon training pool that will represent the country in the 2012 Asian Duathlon Championships this Sunday in Subic Bay Freeport.


"Igimax will have a special role in the team," national triathlon coach Melvin Fausto said.


Fausto visited Cebu two weeks ago to organize TRAP's national grassroots development program to the different cities and towns around the country.  The project aims to help popularize the sport and discover young potential triathletes.


Duathlon is a multisport endurance event that involves running and cycling.  The two-time SAC awardee will compete under the Junior Elite category consisting of a 5km run, 20km bike, and 2.5km run.


Earlier this year, the YKKBikes-supported cyclist also represented the country in the 2012 Asian Cycling Championships in Malaysia, the only Cebuano and the youngest in the Phl cycling team.


"This is going to be tough for me but I will try my best for Cebu to be represented in Asian Duathlon," shared the resident of Brgy. Lahug.


To prepare for the international event, Cebu-based YKK Trading will provide the youngster with the top of the line cycling equipment fitted with Ridley, Campagnolo, Token, FSA, Vision, Lazer, Fizik, Santini, Carnac, Kenda and Cycleops components.
at 9:27 AM No comments: 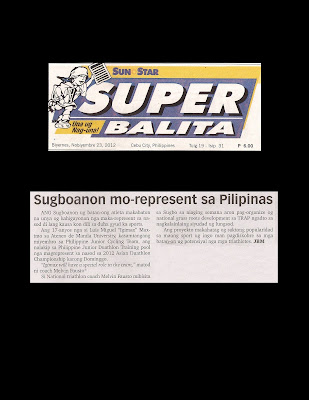 
Iggy will be competing in the junior men’s elite category and will be up against foes from Japan, Korea and Taipei.


“I expect this race to be very tough with the presence of several foreign foes. Whatever the results will just be a bonus for me at this time. This will be my first time joining an international duathlon competition. Finish the race strong. No DNF.


I never expected to be included in the PHL Duathlon Team. I was never a runner in high school. I guess being a cyclist and a football player helped,” said Iggy.


His sister, 13-year-old Ana Patricia of Sacred Heart School - Hijas de Jesus will race in the youth 13-15 category together with Justin Chiongbian.


Yuan will be competing in the 11-12 years old Supertrikids category.


Elmo Clarabal, who got second place in the Xterra Off-road triathlon in Liloan, will race in the 30-34 age group.
at 6:51 AM No comments: 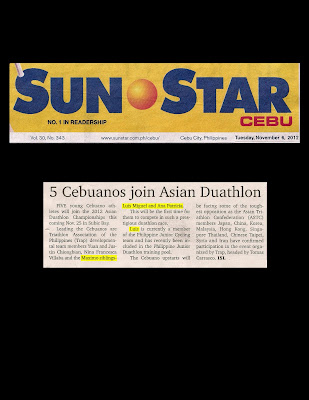 
This will be the first time for them to compete in such a prestigious duathlon race.


The Cebuano upstarts will be facing some of the toughest opposition as the Asian Triathlon Confederation (ASTC) members Japan, China, Korea, Malaysia, Hong Kong, Singapore Thailand, Chinese Taipei, Syria and Iran have confirmed participation in the event organized by Trap, headed by Tomas Carrasco.
at 6:47 AM No comments: 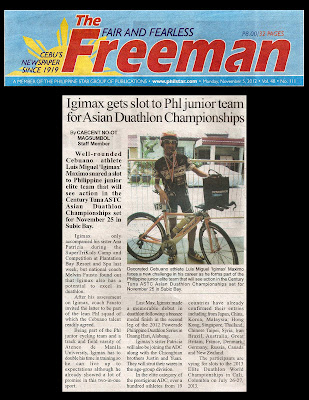