THE University of the Visayas (UV) blanked the University of Cebu (UC), 4-0, to take its second straight victory in the Cebu Schools Athletic Foundation Inc. football tournament at the University of San Carlos-Technological Center (USC-TC) football field last Sunday.
Freddie Rica and Junard Aguilar scored the second goals of the tournament in UV’s second straight shutout win of the event.
Rica struck the first goal in the 46th minute and Aguilar added another in the 50th minute.
The two also scored the two goals for UV in their 2-0 victory over the defending champion USC in the first game last Saturday.
Eight minutes after UV’s second goal, Josaphat Sacil scored another and Frederick Alazas capped the rout in the 81st minute as UV handed UC its second loss in two games.
Meanwhile, in the second game the University of Southern Philippines Foundation (USPF) fought back from a two-goal deficit to salvage a 2-2 draw with USC.
Hubert Buot scored early for USC just six minutes into the game and Kyle Soriano gave USC a 2-0 advantage in the 26 minute.
USPF’s Christian Deck Pacana donned the hero’s cap and averted a shutout for the team as he scored twice in an 11-minute span.
Pacana got the team on the score sheet in the 77th and added the equalizer in the 88th minute to salvage the point.
On Nov. 24, the undefeated University of San Jose-Recoletos Jaguars will face USPF at 1 p.m. and USC will gun for its first win against the winless UC Webmasters still at the USC-TC football field. (EKA)
at 10:12 AM No comments: 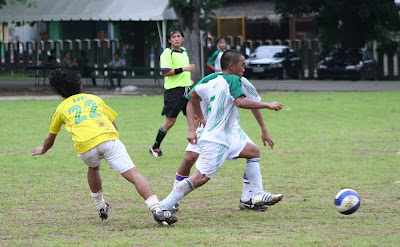 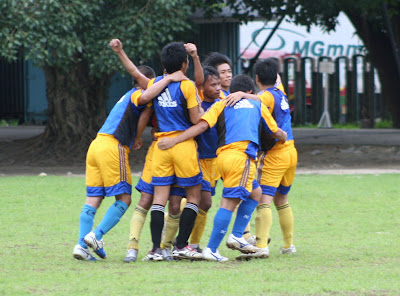 Maxi Maximo PaBolFC.com
at 8:15 AM No comments:

courtesy of SUN STAR DAILY Newspaper (www.sunstar.com.ph)November 18, 2007 Sunday issue
by Edri K. Aznar, Correspondent
It was a day for former champions in the opening of the Cebu Schools Athletic Foundation football event at the University of San Carlos Technological Center field.

The University of the Visayas (UV), the 2005 champions, humbled the current title holders, USC, 2-0, while four-time champion University of San Jose Recoletos opened its campaign on a strong note with a 3-1 win against the University of Cebu.

Junard Aguilar scored the first goal for UV in the 38th minute of the first half and Freddie Rica added another goal in the 72nd minute for the win.

The youthful team now handled by Fegidero’s former assistant Gary Panagsagan, started its campaign on a wrong note after losing to UV in their first game.

Adrianne Mejaran struck first for the Jaguars in the 13th minute before Ariel Repeso equalized for UC seven minutes later.

The Jaguars got the go-ahead goal from Paul dela Victoria with only 10 minutes left before Robert Mamac added the insurance goal deep in injury time.

Today UV will face UC at 1 p.m. and the University of Southern Philippines Foundation (USPF) will face off with USC at 3 p.m. still at the USC-TC football field. (EKA)
at 7:00 AM No comments:


DEFENDING Cebu Schools Athletic Foundation Inc. (Cesafi) football champion University of San Carlos will start its title defense when it hosts the University of the Visayas in the opening game at 1 p.m. this Saturday.
After the opening match, last year’s runnerup and four-time champion University of San Jose-Recoletos will face the University of Cebu at 3 p.m.
Cesafi football tournament manager Jonathan Maximo yesterday told Sun.Star Cebu that the next round of games will be on Nov. 18 after the formal opening of the Cesafi other events at the New Cebu Coliseum.
On Sunday, 2005 champion University of the Visayas will face UC at 1 p.m., while USC will take on the University of Southern Philippines.
Maximo said that this year’s participants must pass the eligibility rules of the Cesafi to qualify for the event.
Each player must have at least 14 academic units and must also pass 60 percent of all their subjects.
Maximo also said that the screening was done by the Cesafi screening committee composed of athletic directors of all member schools.

He added that the screening committee will also provide the final lists of players this Friday after some players said that they did not receive yet their final grades.

“We will give them time, an extension on Friday to prove they’re qualified based on the Cesafi eligibility rules”, he said.


THE Sacred Heart School-Hijas de Jesus Girls football team will be taking part in the Alaska Cup 2007 at the Alabang Country Club in Manila tomorrow.
PaBol top honcho Jonathan Maximo said he is bringing the same team to the Alaska Cup that competed last year in the Girls 16-Under division, where they managed to enter the quarterfinal round.
“Last year, the same team competed in the division, which was an older age group for them. This year, we are hopeful that with the right age-group for them, they will perform better,” said Maximo.
Leading the team is keeper Julienne Canoy, who was named the MVP in the 2007 San Roque Football Festival. She will be joined by Patti Liu, Bea Maximo, Erika Casas, Banban Yu, Lea Ann Calejesan, Jackie Ting, Nicole Chanlim, Mara Dado, Maris Ting, Renee Songalia and Karina Hilado.
They will be going up against Makati FC, St. Scholastica (Bacolod), Davao United FC, Bene FC A, Bene FC B, Faith Academy, Flames FC, St. Pedro Poveda A and B, Pampanga Agricultural College, Xavier Alumni FC, Perpetual Help (Las Piñas), Miriam College, De la Salle (Lipa), Westfield (Angeles City), La Salle College (Antipolo), Southville International School and British School Manila. (MCB)
at 10:56 AM No comments: