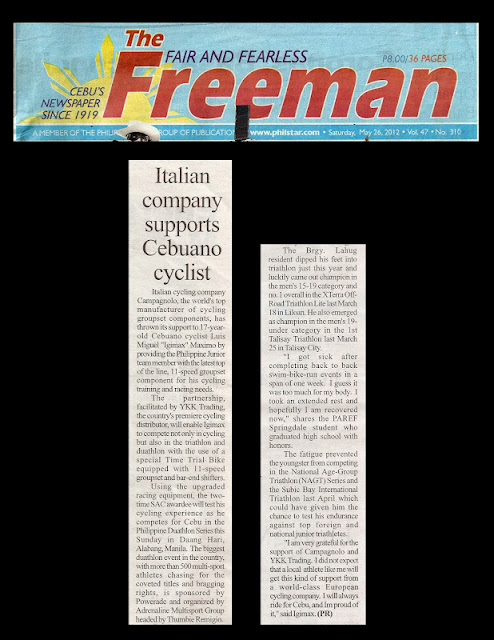 Published in The Freeman Newspaper on May 26, 2012 Saturday issue
Manny Villaruel, Sports Editor

The partnership, facilitated by YKK Trading, the country's premiere cycling distributor, will enable Igimax to compete not only in cycling but as well as in triathlon and duathlon with the use of a special Time Trial Bike equipped with 11-speed groupset and bar-end shifters.

Using the upgraded racing equipment, the two-time SAC awardee will test his cycling experience as he competes for Cebu in the Philippine Duathlon Series this Sunday in Daang Hari, Alabang, Manila. The biggest duathlon event in the country, with more than 500 multi-sport athletes chasing the coveted titles and bragging rights, is sponsored by Powerade and organized by Adrenaline Multisport Group headed by Thumbie Remigio.
-
The Brgy. Lahug resident dipped his feet into triathlon just this year and luckily came out champion in the men's 15-19 category and no. 1 overall in the Xterra Off-Road Triathlon Lite last March 18 in Liloan. He also emerged as champion in the men's 19-under category in the 1st Talisay Triathlon last March 25 in Talisay City.
-
"I got sick after completing back to back swim-bike-run events in a span of one week. I guess it was too much for my body. I took an extended rest and hopefully I am recovered now," shares the PAREF Springdale student who graduated high school with honors.
-
The fatigue prevented the youngster from competing in the National Age Group Triathlon (NAGT) Series and the Subic Bay International Triathlon last April which could have given him the chance to test his endurance against top foreign and national junior triathletes.
-
"I am very grateful for the support of Campagnolo and YKK Trading. I did not expect that a local athlete like me will get this kind of support from a world-class European cycling company. I will always ride for Cebu, and Im proud of it" said Igimax.
at 10:00 AM