IGI MAXIMO AIMS TO MAKE A MARK IN CYCLING WORLD

CEBU, Philippines - He’s only 14 years old but Igi Maximo is now seriously involved, not with someone but with cycling.
This weekend, Maximo embarks on a daunting mission as he will compete in the Philippine Premier Cycling League in Manila.
Igi used to play football especially when his father Jonathan “Maxi” Maximo, an award-winning sportsman, was still president of the Cebu Football Association.
When his family got into running, he also goes out with them until he got hooked with cycling.
Between running and cycling, Igi’s dad felt his son loves cycling more. 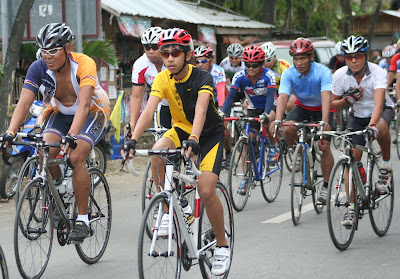 After an impressive showing in "Tour Ni Frank" over the weekend, 14-year-old Igi Maximo (in black and yellow Livestrong jersey) brings his newfound sporting hobby to a higher level as he competes in the Youth Division of the Philippine Premiere Cycling League this Sunday in Manila. (The Freeman Newspaper)
Igi started out racing with both young and veteran cyclists during the weekly races at the Mandaue City reclamation area until last weekend when he faced his toughest challenge as a cyclist by joining the 8th RECYCLE-Luzvimin Cycling Series billed as “Tour Ni Frank”.
Although he was relatively new to that kind of competition, Igi bravely showed what stuff he’s made of and finished with an impressive standing, beating about half of the total number of riders in his class.
This weekend, Igi’s might will be tested further as he strut his wares in the youth division of the one-day PPCL action at the Macapagal highway. The event features an individual time trial (ITT), team time trial (TTT) and a criterium. – Caecent No-ot Magsumbol (FREEMAN NEWS) 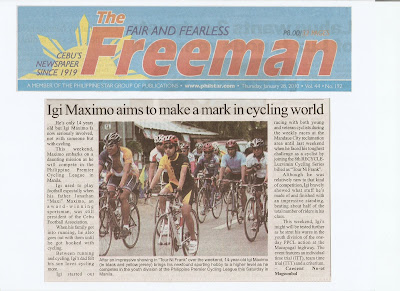