The Freeman Newspaper.  CEBU, Philippines - Two riders from Team PLDT topped their respective classes in the first day of action in the 8th RECYCLE-Luzvimin-USA Cebu Race Series also known as 'Tour Ni Frank' yesterday at the Mandaue City reclamation area.
Bitoy Daa of PLDT-Bohol dominated the criterium under class B while teammate Dondi Azarcon ruled in category C.
Daa crossed the finished line in one hour, 12 minures and 48.088 seconds to take the yellow jersey going into today's road race from Toledo and most of Transcentral highway all the way to Buak.
HSBC's Bernie Mateo took the second place honors followed by Cebu's Frank Alindao.
HBC’s main man Ernie Hortaleza, who brought the hi-tech timing device known as the transponder to Cebu, wound up fourth with the time of 1:13:43.088, while Jef Flores of Dipolog placed fifth in 1:13:43.134.
Rounding up the top 10 finishers were Noy Jopson (1:13:43.173), Rommel Lindayog (1:13:43), Wilson Rosetes (1:13:44), Dipolog's Pinpin Uy (1:13:44:349) and Cebu s Ome Rodriguez (1:13:44.426).
In class C, Azarcon clocked in 1:02:34 for the top post, edging out Leyte's Allan Pastor by just one-tenth of a second. Antonio Codena got the third place.
Completing the top 10 cast were Lito Pastedio, Tyre Lambo, Louie Gutierrez, Tata Ty, Xyle Regis,Alex Barras and Bogart Dela Rosa.
Igi Maximo, on the other hand, got the suprise of everyone after the 14-year-old neophyte dared to race against the veterans and racers far older than him.
Igi, son of noted sportsman Jonathan Maximo, had to sign a waiver that the organizers will not be liable for any injury that he may suffer for joining the race.
Igi Maximo showed it was worth a try as he landed 21st in a field of 50 under class C.—Caecent No-ot Magsumbol (FREEMAN NEWS)
Source:
http://www.philstar.com/Article.aspx?articleId=543406&publicationSubCategoryId=110 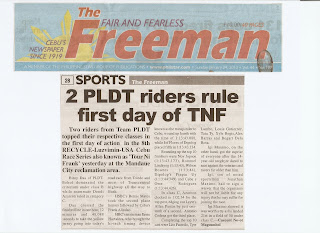