CEBU'S MAXIMO PLACES 6TH IN TOUR OF CLARK 18-U CLASS 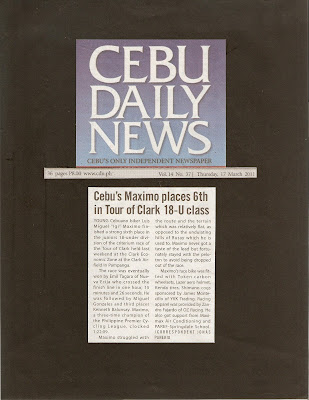 Click to enlarge
Published in Cebu Daily News on March 17, 2011 Thursday issue
by Jonas Panerio, Correspondent
Rick Gabuya, Sports Editor
YOUNG Cebuano biker Luis Miguel "Igi" Maximo finished a strong sixth place in the juniors 18-under division of the criterium race of the Tour of Clark held last weekend at the Clark Economic Zone at the Clark Airfield in Pampanga.
The race was eventually won by Emil Tagara of Nueva Ecija who crossed the finish line in one hour, 15 minutes and 26 seconds.  He was followed by Miguel Gonzales and third placer Kenneth Balunsay.  Maximo, a three-time champion of the Philippine Premiere Cycling League, clocked 1:22:09.
Maximo struggled with the route and the terrain which was relatively flat, as opposed to the undulating hills of Busay which he is used to.  Maximo never got a taste of the lead but fortunately stayed with the peloton to avoid being dropped out of the race.
Maximo's race bike was fitted with Token carbon wheelsets, Lazer aero helmet, Kenda tires, Shimano cogs sponsored by James Montecillo of YKK Trading.  Racing apparel was provided by OZ Racing.  He also got support from Maximax Air Conditioning﻿ and PAREF-Springdale School./CORRESPONDENT JONAS PANERIO.
at 8:38 PM

thanks boyax. he was supposed to join this year's 2010 xterra but rules state that participants should be 18yo and above. igi is still 15yo so hopefully in the near future. regards

you are welcome Max.

i thought Igi joined XTerra 2011 in a relay category last March 6.
anyway, XTerra will be here in the Phils. for 7 years (if i'm not mistaken).
you are right Max, Igi is still very young. academics, our 1st priority.

btw, have you ever tried to register Igi for arafura friendship games in darwin, australia?