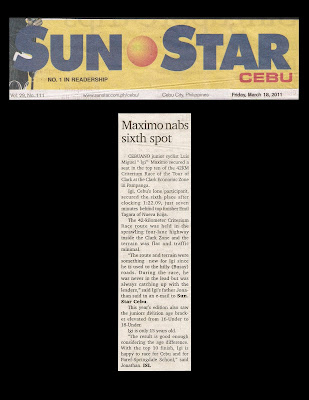 CEBUANO junior cyclist Luis Miguel “ Igi” Maximo secured a seat in the top ten of the 42KM Criterium Race of the Tour of Clark at the Clark Economic Zone in Pampanga.
Igi, Cebu’s lone participant, secured the sixth place after clocking 1:22.09, just seven minutes behind top finisher Emil Tagara of Nueva Ecija.
The 42-kilometer Criterium Race route was held in the sprawling four-lane highway inside the Clark Zone and the terrain was flat and traffic minimal.
“The route and terrain were something new for Igi since he is used to the hilly (Busay) roads. During the race, he was never in the lead but was always catching up with the leaders,” said Igi’s father Jonathan said in an e-mail to Sun.Star Cebu.
This year’s edition also saw the juniors division age bracket elevated from 16-Under to 18-Under.
Igi is only 15 years old.
“The result is good enough considering the age difference. With the top 10 finish, Igi is happy to race for Cebu and for Paref-Springdale School,” said Jonathan
at 8:08 AM