MAXIMO SETTLES FOR 2ND IN ORMOC 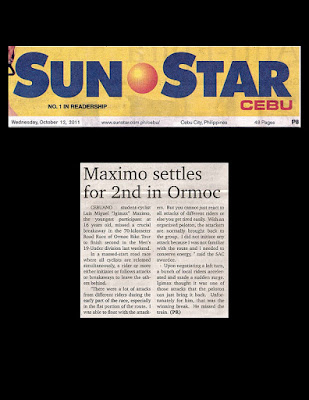 
In a massed-start road race where all cyclists are released simultaneously, a rider or more either initiates or follows attacks or breakaways to leave the others behind.


“There were a lot of attacks from different riders during the early part of the race, especially in the flat portion of the route. I was able to float with the attackers.


But you cannot just react to all attacks of different riders or else you get tired easily. With an organized peloton, the attackers are normally brought back to the group. I did not initiate any attack because I was not familiar with the route and I needed to conserve energy, ” said the SAC awardee.


Upon negotiating a left turn, a bunch of local riders accelerated and made a sudden surge. Igimax thought it was one of those attacks that the peloton can just bring it back. Unfortunately for him, that was the winning break. He missed the train. (PR)
at 5:57 AM