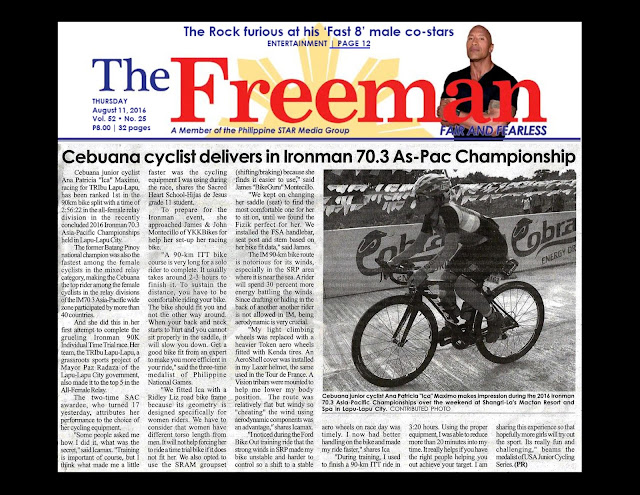 Cebuana junior cyclist Ana Patricia "Ica" Maximo, racing for TRIbu Lapu-Lapu, has been ranked 1st in the 90km bike split with a time of 2:56:22 hours in the all-female relay division in the recently concluded 2016 Ironman 70.3 Asia-Pacific Championships held in Lapu-Lapu City.
The former Batang Pinoy national champion was also the fastest among the female cyclists in the mixed relay category, making the Cebuana the top rider among the female cyclists in the relay divisions of the IM70.3 Asia-Pacific wide zone participated by more than 40 countries.
And she did this in her first attempt to complete the grueling Ironman 90K Individual Time Trial race. Her team, the TRIbu Lapu-Lapu, a grassroots sports project of Mayor Paz Radaza of the Lapu-Lapu City Govt., also made it to the Top 5 in the All-Female Relay.
The two-time SAC awardee, who turned 17 yesterday, attributes her performance to the choice of her cycling equipment.
"Some people asked me how I did it, what was the secret," said Icamax. "Training is important of course, but I think what made me a little faster was the cycling equipment I was using during the race, shares the Sacred Heart School - Hijas de Jesus grade 11 student.
To prepare for the Ironman event, she approached James & John Montecillo of YKKBikes to help her set-up her racing bike.
"A 90-km ITT bike course is very long for a solo rider to complete. It usually takes around 2-3 hours to finish it. To sustain the distance, you have to be comfortable riding your bike. The bike should fit you and not the other way around. When your back and neck starts to hurt and you cannot sit properly in the saddle, it will slow you down. Get a good bike fit from an expert to make you more efficient in your ride," said the three-time medalist of Phil National Games.
"We fitted Ica with a Ridley Liz road bike frame because its geometry is designed specifically for women riders. We have to consider that women have different torso length from men. It will not help forcing her to ride a time trial bike if it does not fit her. We also opted to use the SRAM groupset (shifting/braking) because she finds it easier to use," said James "BikeGuru" Montecillo.
"We kept on changing her saddle (seat) to find the most comfortable one for her to sit on, until we found the Fizik perfect for her. We installed the FSA handlebar, seat post and stem based on her bike fit data", said James.
The IM 90-km bike route is notorious for its winds, especially in the SRP area where it is near the sea. A rider will spend 30% more energy battling the winds. Since drafting or hiding in the back of another another rider is not allowed in IM, being aerodynamic is very crucial.
"My light climbing wheels was replaced with a heavier Token aero wheels fitted with Kenda tires. An AeroShell cover was installed in my Lazer helmet, the same used in the Tour de France. A Vision tribars were mounted to help me lower my body position.  The route was relatively flat but windy so "cheating" the wind using aerodynamic components was an advantage," shares Icamax
"I noticed during the Ford Bike Out training ride that the strong winds in SRP made my bike unstable and harder to control so a shift to a stable aero wheels on race day was timely. I now had better handling on the bike and made my ride faster," shares Ica
"During training, I used to finish a 90-km ITT ride in 3:20 hours. Using the proper equipment, I was able to reduce more than 20 minutes into my time. It really helps if you have the right people helping you out achieve your target. I am sharing this experience so that hopefully more girls will try out the sport. Its really fun and challenging," beams the medalist of USA Junior Cycling Series.
at 3:33 PM