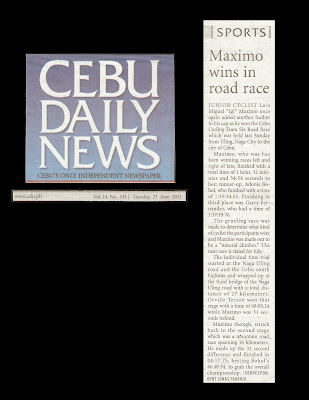 JUNIOR CYCLIST Luis Miguel “Igi” Maximo once again added another feather to his cap as he won the Cebu Cycling Team Six Road Race which was held last Sunday from Uling, Naga City to the city of Cebu.


The grueling race was made to determine what kind of cyclist the participants were and Maximo was made out to be a “natural climber.” The next race is slated for July.


The individual time trial started at the Naga Uling road and the Cebu south highway and wrapped up at the third bridge of the Naga Uling road with a total distance of 27 kilometers. Orville Tecson won that stage with a time of 48:05.24 while Maximo was 31 seconds behind.


Maximo though, struck back in the second stage which was a mountain road race spanning 16 kilometers. He made up the 31 second difference and finished in 44:17.75, besting Bohol’s 46:48.94, to grab the overall championship. /Correspondent Jonas Panerio
at 8:57 PM