Cebuano John Renee Mier will not be on the starting block to pull his PLDT-Spyder Team to the finish line in today's Stage 10 80km Team Time Trial (TTT) Ronda Pilipinas.  The time-trial specialist unfortunately DNF'd in Stage 5 in his hometown Cebu.  He suffered extreme stomach problem forcing him to quit the stage and have no choice but to abandon the race.

In the Team Time Trial (TTT) competition, each team will be released with an interval of five (5) minutes from each other.  The team with the fastest time (based on the clocking of the 3rd rider) in crossing the finish line wins the stage! 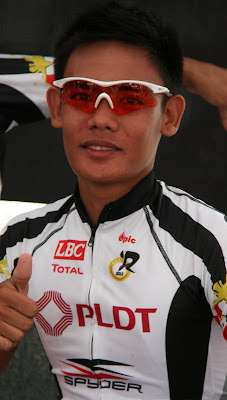 John Renee Mier
Young Rider Award - 2012 Ronda Pilipinas
Brought to you by Total (Phils)
at 5:57 AM