"After learning that El Joshua Carino, then running second overall heading to the Tarlac-Subic Stage Seven, reeled to last place after suffering a flat rear tire, Lim willingly slowed down and waited for the former – not just to guide him back but also to give up his bike, and practically the race.

Though the 19-year-old Carino dropped to No. 6, he remained in the title hunt, thanks to Lim’s unselfish act and teammanship.

Now, given a chance to shine, Lim seized the moment.

“I’m really ready to give up my bike or anything for a teammate because he (Carino) is more important to the team than myself,” said Lim" - Philippine Star

"Rustom Lim made a selfless act and was rewarded generously with a first career stage triumph. Lim never left his teammate until the end of the stage but the blowout dropped Cariño from second to sixth overall." - Phil Daily Inquirer 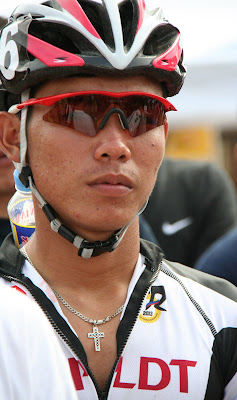 Rustom Lim gathers his thoughts prior to the race in Stage 4 Ronda Pilipinas last January 17, 2013 in Lapu-Lapu City, Cebu.
Brought to you by Total Philippines.
at 7:20 PM