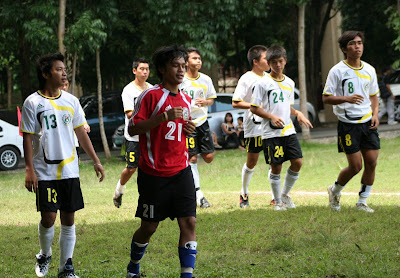 USC players doing the warm-up routine, waiting for ... nothing. 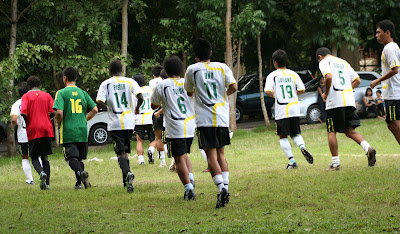 Aborted CDU vs USC College game. Oct. 11, 2008. USC won 3-0 without a sweat. The game was defaulted in favor of USC. CDU showed up with only 6 players, 1 less than the FIFA rule of minimum 7 players to start a game.
If the game was played, can USC bury CDU with more than 3 goals? Remember, CDU is a newcomer and USPF massacred them with 6 goals to nil in its first game. Hopefully, the Goal Difference (GD) will not betray USC as it tries to advance to the Semi-Final round.
Post your opinion in the Comments section, below.
at 8:30 PM

USc can score more than 3 goals vs CDU. Even more than 6 goals, pwede pa.

Ive heard some USC players even promised they will "tambak" CDU with goals, goals, goals.

having seen USC practice every morning, there's no doubt that USC can nail CDU with more than 3 goals. they've got really good players on the team. as for CDU, dont let your hopes down so fast. you came to play the game, you came here to finish what you are tasked to do. to all the teams: good luck on the upcoming matches! see on saturday guys ((: