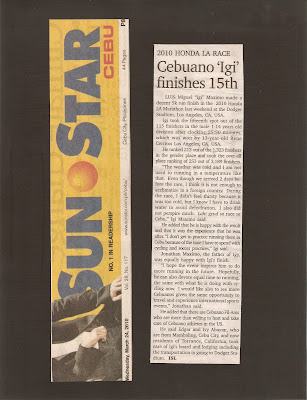 
LUIS Miguel “Igi” Maximo made a decent 5k run finish in the 2010 Honda LA Marathon last weekend at the Dodger Stadium, Los Angeles, CA, USA.
Igi took the 14th spot out of the 115 finishers in the male 1-14 years old division after clocking 25:50 minutes, which was won by 13-year-old Rene Cerritos Los Angeles, CA, USA.
He ranked 213 out of the 1,323 finishers in the gender place and took the over-all place ranking of 253 out of 3,189 finishers.
“The weather was cold and I am not used to running in a temperature like that. Even though we arrived 2 days before the race, I think it is not enough to acclimatize in a foreign country. During the race, I didn’t feel thirsty because it was too cold, but I know I have to drink water to avoid dehydration. I also did not perspire much. Lahi gyud sa race sa Cebu,” Igi Maximo said.
He added that he is happy with the result and that it was the experience that he was after. “I don’t get to practice running there in Cebu because of the time I have to spend with cycling and soccer practices,” Igi said.
Jonathan Maximo, the father of Igy, was equally happy with Igi’s finish.
“I hope the event inspires him to do more running in the future. Hopefully, he can also devote equal time to running, the same with what he is doing with cycling now. I would like also to see more Cebuanos given the same opportunity to travel and experience international sports events.” Jonathan said.
He added that there are Cebuano Fil-Ams who are more than willing to host and take care of Cebuano athletes in the US.
He said Edgar and Ivy Abayan, who are from Mambaling, Cebu City, and now residents of Torrance, California, took care of Igi’s board and lodging including the transportation in going to Dodger Stadium.
Published in the Sun.Star Cebu newspaper on March 24, 2010.
at 12:57 AM