MAXIMO GETS INVITE TO RACE IN U.S.

Published in the Sun.Star Cebu newspaper on March 10, 2010 Wednesday issue.


FOURTEEN-year-old Luis Miguel “Igi” Maximo’s fame has reached far and wide as he was recently invited to join the US Junior Cycling this summer.
Maximo’s father Jonathan, said they received the invitation and are now contemplating on whether to accept it.
“We have not decided yet because there are several things to consider, like the finances and whether Igi is ready for it mentally and physically,” said Jonathan.
He added that they are still consulting with family and friends about it and exploring the idea of some Cebuano companies or individuals for their support in this new junior cycling project.
“We will also seek advise from Igi’s school, his mentors in the Cebu Cycling community and the cycling federation. Dapat, team effort ni,” said Maximo.
The US junior events that are being considered are the road, criterium and circuit races, and club rides in the California area.
“Cycling in the USA is on a higher level. The experience and exposure Igi gets will be a lot different from our local cycling,” he added.
The invitation was offered by the US-based Cebuano cyclists spearheaded by Frank Gatdula, who has sponsored the annual “Tour ni Frank” (TnF), a road bike race which he has been supporting for the last 10 years.
Gatdula spotted Igi during the Tour ni Frank last January, where the tried to finish the dreaded uphill course without stopping or walking and in Igi’s performance in Philippine Premiere Cycling League, where he earned back-to-back titles in the Junior category. 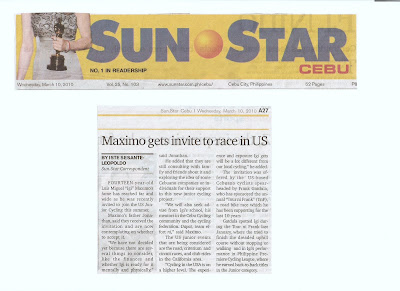