CEBU, Philippines - Cebuano Igi Maximo has been invited to race in the U.S, but as eager as he may be, everything will have to depend on the funds they can raise to sustain his stint there.
Several Fil-Ams including U.S.-based Cebuano Frank Gatdula, the man behind the Tour Ni Frank had said, the young Maximo could join in road races, criterium and club rides in California plus a junior development camp.
“Igi started cycling in Nov 2009 and his first race was the TnF last January 23-24, 2010. That was where he was noticed by Mr. Gatdula who witnessed the 14 year old’s attempt to finish the dreaded, steep mountain climb of Toledo City- Balamban-Trans Central Highway - Busay Stage without stopping/walking,” Igi’s father Jonathan said.
More than personal achievements that Igi may get out of his trip to U.S, should this push through, his father vows to share all experiences to fellow Cebuanos.
Earlier, the former president of the Cebu Football Association, Jonathan Maximo said, he hopes that a junior cycling school can be set up here in Cebu so more potential young cyclists will be produced.
Without much exposure and training program available for the young racers here, Igi Maximo had to go to Manila to experience racing on a fair playing field and know more techniques from seasoned racers in Luzon.
Igi’s back-to-back victories in the junior division in the 2010 Philippine Premiere Cycling League (PPCL) had stirred interest on him.
However, although those who opened the idea of racing in the U.S. had also promised to support Igi’s stay in California, the parents of the newest local cycling star just want to make sure that they also have a little spare of funds in case of emergency in the U.S.
“It’s an invitation to visit USA and experience US Junior Cycling - tours, epic rides, camps & races. Cycling in the USA is on a higher level. The experience and exposure you get will be a lot different from our local cycling.
“For example, the US Junior category starts at 10 years old, something we don’t have here in Cebu or perhaps in the country.
“You will learn something positive out of the experience... something that you can share to Cebu sports in general and Cebu cycling in particular,” Jonathan Maximo added. – Caecent No-ot Magsumbol (FREEMAN NEWS) 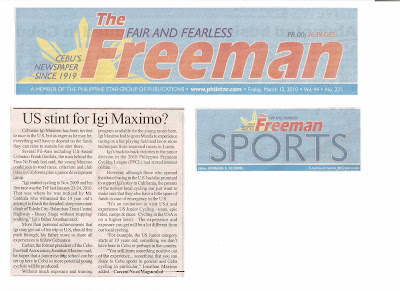