THE HITS just keep on coming for young up-and-coming cyclist Luis Miguel "Igi" Maximo as the 14-year old has been invited to compete in the United States as a result of his impressive performance in races on the local front and the national stage.
Maximo, the son of former Cebu Football Association president and now TEAM maX1mo and PaBol manager Jonathan "Maxi" Maximo, has been a prodigy in the racing scene after back-to-back wins in the junior division of the Philippine Premiere Cycling League and his courageous performance in the treacherous Tour ni Frank.
As a result, he has been invited by top executive cyclist Frank Gatdula, the sponsor of the aforementioned decade-long Tour ni Frank, to visit the USA and experience US junior cycling.
The US junior events that are being considered are the Road, Criterium and Circuit races and Club rides in the California area.
The elder Maximo and his son, though, have not yet decided on whether or not to take up the offer due to financial constraints and the fact that Igi might be taking up too much, too soon.
Maximo fears that his son might be burnt-out from the pressure of competing in another country./CORRESPONDENT JONAS PANERIO 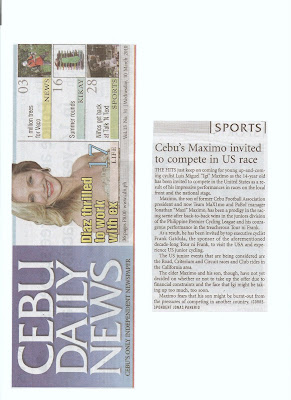