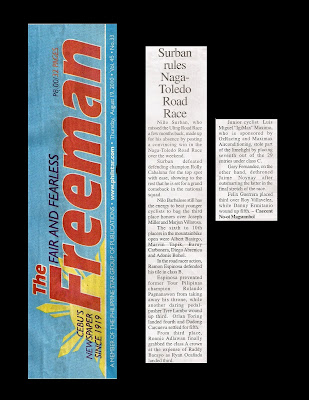 
CEBU, Philippines – Niño Surban, who missed the Uling Road Race a few months back, made up for his absence by posting a convincing win in the Naga-Toledo Road Race over the weekend.
Surban defeated defending champion Rolly Cabaluna for the top spot with ease, showing to the rest that he is set for a grand comeback in the national squad.

Nilo Barbalose still has the energy to beat younger cyclists to bag the third place honors over Joseph Miller and Marjun Villarosa.
The sixth to 10th placers in the mountainbike open were Albert Basirgo, Marvin Tapik, Baruy Carbonera, Diego Abrenica and Adonis Bohol.
In the road racer action, Ramon Espinosa defended his tile in class B.
Espinosa prevented former Tour Pilipinas champion Rolando Pagnanawon from taking away his throne, while another daring pedal-pusher Tyre Lambo wound up third. Orlan Toring landed fourth and Dadong Carcueva settled for fifth.
From third place, Ronnie Adlawan finally grabbed the class A crown at the expense of Raddy Bacayo as Ryan Ocañada landed third.
Junior cyclist Luis Miguel "IgiMax" Maximo, who is sponsored by OzRacing and Maximax Airconditioning, stole part of the limelight by placing seventh out of the 29 entries under class C.
Gary Fernandez, on the other hand, dethroned Jaime Noynay after outsmarting the latter in the final stretch of the race.
Felix Guerrera placed third over Roy Villavelez, while Danny Ermitanio wound up fifth. (FREEMAN)
at 6:26 AM