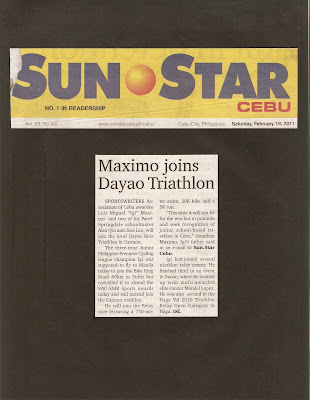 SPORTSWRITERS Association of Cebu awardee Luis Miguel “Igi” Maximo and two of his Paref-Springdale schoolmates Alex Qui and Jose Lao, will join the local Dayao Bros Triathlon in Catmon.
The three-time Junior Philippine Premiere Cycling league champion Igi was supposed to fly to Manila today to join the Bike King Road 80km in Subic but cancelled it to attend the SAC-SMB Sports awards today and will instead join the Catmon triathlon.
He will join the Relay race featuring a 750-meter swim, 20K bike and a 5K run.
“This time it will not be for the win but to promote and seek recognition of junior, school-based triathlon in Cebu,” Jonathan Maximo, Igi’s father said in an e-mail to Sun.Star Cebu.
Igi had joined several triathlon relay events. He finished third in an event in Danao, where he teamed up with multi-awarded elite runner Mendel Lopez. He was also second in the Naga Val 2020 Triathlon Relay Open Category in Naga.
at 5:45 AM