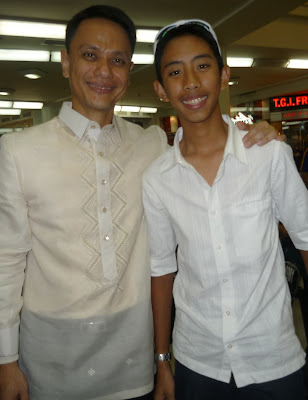 Published in Sun Star Newspaper on February 20, 2011 Sunday issue
by John Pages, Columnist - Match Point
Mike Limpag, Sports Editor
AS president of the Sportswriters Association of Cebu (SAC), I delivered a speech yesterday afternoon. In attendance were hundreds: parents, coaches, the 7-footer basketball giant Junemar Fajardo; the Athlete of the Year, Donnie Nietes; and the rest of the awardees of the 29th SAC-SMB Cebu Sports Awards. Here was my speech....
Good afternoon! Cebu City Sports Commission Chairman Ed Hayco... Our Sportsman of the Year, representing chess... Mr. Boojie Lim. Our Orlando C. Sanchez awardee: Dr. Danny Villadolid. Our guest of honor who flew in from Manila... he was supposed to bring the Azkals, but they’re about to start training in Baguio.. our presidential awardee: Mr. Dan Palami. To the parents and coaches in attendance... And most of all, to you, our awardees... Maayong hapon and congratulations!
The first time I attended the Sports Awards was 22 years ago. I was then 16 years old and—like you—I received an award for the sport of tennis. The awarding was held at the Magellan Hotel. Since then, the awards had always been held at an exclusive hotel or function room area. Each time, we would only invite the head coach or the team captain.
That is why I am so happy today to see all of you. Because it’s not just one coach or one player but all of you who should be recognized.
I want to share with you my all-time favorite quotation:
I have missed more than 9,000 shots in my career.
I have lost almost 300 games.
Twenty six times, I have been entrusted to take the game-winning shot... and missed.
I have failed over and over and over again in my life....
And that is why I succeed.
You know who said those words? Michael Jordan. The person considered the greatest basketball player—the greatest athlete of all time—said that failure is the reason for his success.
I mention this quote because—although all of you here are champions and gold medalists—the reason behind your success is also failure.
You have failed many times. You have been defeated. The only athlete I know who remains undefeated is Floyd Mayweather, Jr.—but he’s a failure because he’s afraid to face our very own Manny Pacquiao.
Now, in your own training and in your many competitions, you have failed several times. But, it was how you responded after the failure that brought you here. You rose from the times when you lost--you trained harder, you did not let failure defeat you. You used failure as motivation to rise and to win.
I mention failure because I see the Cebu Eastern College Baby Dragons here. Back in 2009, CEC lost by 131 points in one game. In another, they lost by a margin of 151 points! Now, today, they are here as the Cesafi high school basketball champions of last year and as our major awardees for basketball. Their comeback story—from failure to triumph—is one of the most amazing stories ever in Cebu sports.
Also, I cite Dan Palami. Years back, our Philippine football players were nobodies. Nobody cared about them. But, thanks to Mr. Palami--who supported and took care of the team while they were failing--today the Azkals are the hottest sports idols in our country.
And so, dear awardees, as you come up on stage in a few minutes and receive your plaques and trophies -- feel proud. Relish this moment. Very few are recognized like you. And, later this year, when you go back to the basketball court or the boxing ring or the football field and, in case you falter and lose, use those moments to become stronger.
Be like Mike. Be like CEC.
Do not be afraid of losing.
Once again, thank you so much. To all the awardees, we are all very, very, very proud of you. Congratulations!
at 6:53 AM