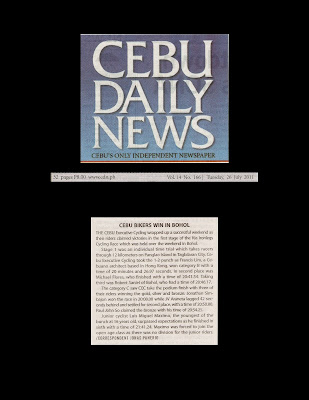 THE CEBU Executive Cycling wrapped up a successful weekend as their riders claimed victories in the first stage of the Kia Ironlegs Cycling Race which was held over the weekend in Bohol.


Stage 1 was an individual time trial which takes racers through 12 kilometers on Panglao Island in Tagbilaran City. Cebu Executive Cycling took the 1-2 punch as Francis Lim, a Cebuano architect based in Hong Kong, won category B with a time of 20 minutes and 26.97 seconds. In second place was Michael Flores, who finished with a time of 20:41.54. Taking third was Robert Saniel of Bohol, who had a time of 20:46.17.


The category C saw CEC take the podium finish with three of their riders winning the gold, silver and bronze. Jonathan Simbajon won the race in 20:08.00 while JV Araneta lagged 42 seconds behind and settled for second place, with a time of 20:50.00. Paul John So claimed the bronze with his time of 20:54.25.


Junior cyclist Luis Miguel Maximo, the youngest of the bunch at 16 years old, surpassed expectations as he finished in sixth with a time of 21:41.24. Maximo was forced to join the open age class as there was no division for the junior riders. /Correspondent Jonas Panerio
at 6:44 AM