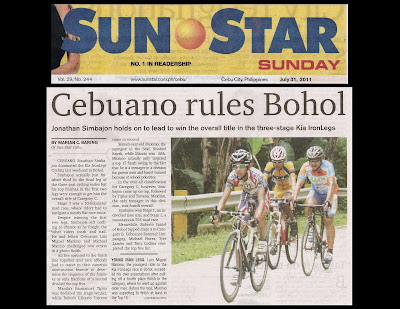 
Simbajon actually just finished third in the final leg of the three-part cycling series but his top finishes in the first two legs were enough to get him the overall title of Category C.


Stage 3 was a 53-kilometer road race, where riders had to navigate a mostly flat race route.


Despite winning the first two legs, Simbajon left nothing to chance as he fought the other riders tooth and nail. He and fellow Cebuanos Luis Miguel Maximo and Michael Mancio challenged two others in a photo-finish.


All five sprinted to the finish line together and race officials had to resort to their camera's slow-motion feature to determine the sequence of the finishes as only fractions of a second divided the top five.


Sixteen-year-old Maximo, the youngest in the field, finished fourth, while Mancio was fifth. Maximo actually only targeted a top 15 finish owing to the fact that he is a teenager in a division for grown men and hasn't trained because of school priorities.


In the over-all classification for Category C, however, Simbajon came up on top, followed by Tiples and Torreon. Maximo, the only teenager in this division, was fourth overall.