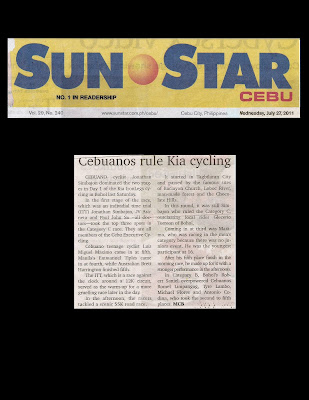 
In the first stage of the race, which was an individial time trial (ITT) Jonathan Simbajon, JV Araneta and Paul John So --all doctors—took the top three spots in the Category C race. They are all members of the Cebu Executive Cycling.


The ITT, which is a race against the clock around a 12K circuit, served as the warm-up for a more gruelling race later in the day.

In the afternoon, the racers tackled a scenic 55K road race.

It started in Tagbilaran City and passed by the famous sites of Baclayon Church, Loboc River, man-made forest and the Chocolate Hills.

In this round, it was still Simbajon who ruled the Category C, outclassing local rider Glecerio Torreon of Bohol.

Coming in at third was Maximo, who was racing in the men's category because there was no juniors event. He was the youngest participant at 16.

After his fifth place finish in the morning race, he made up for it with a stronger performance in the afternoon.