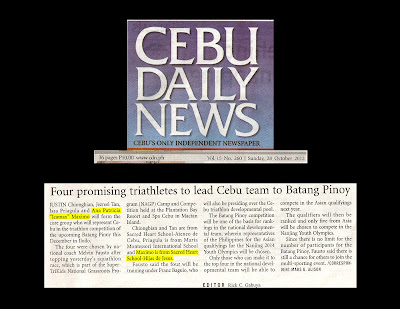 
JUSTIN Chiongbian, Jezreel Tan, Issa Priagula and Ana Patricia "Icamax" Maximo will form the core group who will represent Cebu in the triathlon competition of the upcoming Batang Pinoy this December in Iloilo.


The four were chosen by national coach Melvin Fausto after topping yesterday's aquathlon race, which is part of the SuperTriKids National Grassroots Program (NAGP) Camp and Competition held at the Plantation Bay Resort and Spa Cebu in Mactan Island.


Fausto said the four will be training under Franz Baguio who will also be presiding over the Cebu triathlon developmental pool.


The Batang Pinoy competition will be one of the basis for rankings in the national developmental team, wherein representatives of the Philippines for the Asian qualifyings for the Nanjing 2014 Youth Olympics will be chosen.


Only those who make it to the top four in the national developmental team will be able to compete in the Asian qualifyings next year.


The qualifiers will then be ranked and only five from Asia will be chosen to compete in the Nanjing Youth Olympics.


Since there is no limit for the number of participants for the Batang Pinoy, Fausto said there is still a chance for others to join the multi-sporting event./ CORRESPONDENT MARS G. ALISON
at 6:58 PM

Great article, its nice to know that we have TEAM cebu for KIDS on TRIATHLON.Being a parent you must be So proud.