PINK OCTOBER BRINGS THE FUN BACK IN RUNNING 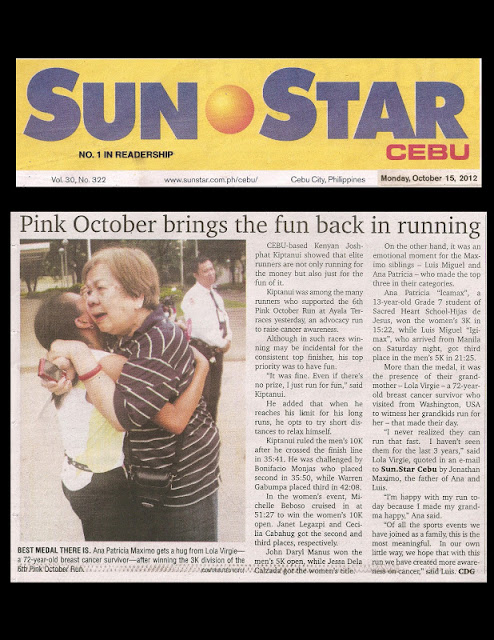 CEBU-based Kenyan Joshphat Kiptanui showed that elite runners are not only running for the money but also just for the fun of it.


Kiptanui was among the many runners who supported the 6th Pink October Run at Ayala Terraces yesterday, an advocacy run to raise cancer awareness.


Although in such races winning may be incidental for the consistent top finisher, his top priority was to have fun.


“It was fine. Even if there’s no prize, I just run for fun,” said Kiptanui.


He added that when he reaches his limit for his long runs, he opts to try short distances to relax himself.


Kiptanui ruled the men’s 10K after he crossed the finish line in 35:41. He was challenged by Bonifacio Monjas who placed second in 35:50, while Warren Gabumpa placed third in 42:08.


In the women’s event, Michelle Beboso cruised in at 51:27 to win the women’s 10K open. Janet Legazpi and Cecilia Cabahug got the second and third places, respectively.


On the other hand, it was an emotional moment for the Maximo siblings – Luis Miguel and Ana Patricia – who made the top three in their categories.


Ana Patricia “Icamax”, a 13-year-old Grade 7 student of Sacred Heart School-Hijas de Jesus, won the women’s 3K in 15:22, while Luis Miguel “Igimax”, who arrived from Manila on Saturday night, got third place in the men’s 5K in 21:25.


More than the medal, it was the presence of their grandmother – Lola Virgie – a 72-year-old breast cancer survivor who visited from Washington, USA to witness her grandkids run for her – that made their day.


“I never realized they can run that fast. I haven’t seen them for the last 3 years,” said Lola Virgie, quoted in an e-mail to Sun.Star Cebu by Jonathan Maximo, the father of Ana and Luis.


“I’m happy with my run today because I made my grandma happy,” Ana said.


“Of all the sports events we have joined as a family, this is the most meaningful. In our own little way, we hope that with this run we have created more awareness on cancer,” said Luis.
Published in the Sun.Star Cebu newspaper on October 15, 2012.
at 7:20 PM

staphylococci impetigo, on the other hired man, is usually characterized by bigger
ordinarily in youth children and seldom in adults.