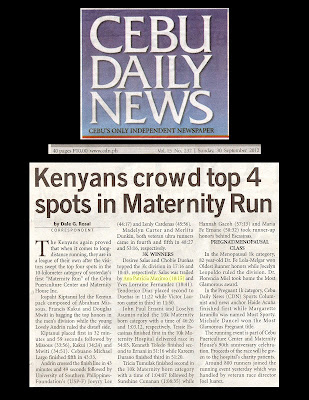 The Kenyans again proved that when it comes to long distance running, they are in a league of their own after the visitors swept the top four spots in the 10-kilometer category of yesterday's first "Maternity Run" of the Cebu Puericulture Center and Maternity House, Inc.


Jospaht Kiptanui led the Kenyan pack composed of Abraham Missous, Francis Kakui and Douglas Mwiti in bagging the top honors in the men's division while the young Lovely Andrin ruled the distaff side.


Madelyn Carter and Merlita Dunkin, both veteran ultra runners came in fourth and fifth in 48:27 and 53:16 respectively.


John Paul Ernani and Loselyn Asumin ruled the 10k Maternity born category with a time of 46:26 and 1:03.12, respectively.  Tessie Escasinas finished first in the 10k Maternity Hospital delivered race in 54:03.  Kenneth Toledo finished second to Ernani in 51:16 while Kareem Durano finished third in 51:20.


The running event is part of Cebu Puericulture Center and Maternity House's 90th anniversary celebration.  Proceeds of the race will be given to the hospital's charity patients.


Around 800 runners joined the running event yesterday which was handled by veteran race director Joel Juarez.
at 6:45 AM