IGIMAX OFF TO SPAIN FOR WYD AND TO WATCH VUELTA 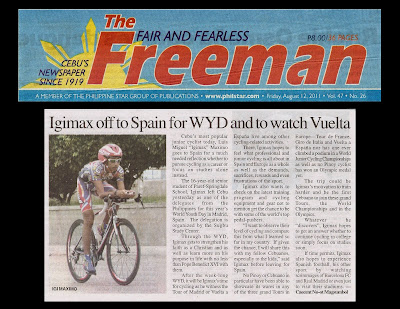 CEBU, Philippines - Cebu’s most popular junior cyclist today, Luis Miguel “Igimax” Maximo goes to Spain for a much needed reflection whether to pursue cycling as a career or focus on studies alone instead.


The 16-year-old senior student of Paref-Springdale School, Igimax left Cebu yesterday as one of the delegates from the Philippines for this year’s World Youth Day in Madrid, Spain. The delegation is organized by the Sugbu Study Center.


Through the WYD, Igimax gets to strengthen his faith as a Christian and as well as learn more on his purpose in life with no less than Pope Benedict XVI with them.


After the week-long WYD, it will be Igimax’s time for cycling as he witness the tour of Madrid or Vuelta a España live among other cycling-related activities.


There, Igimax hopes to feel what professional and junior cycling is all about in Spain and Europe as a whole as well as the demands, sacrifices, rewards and even frustrations of the sport.


Igimax also wants to check on the latest training program and cycling equipment and gear not to mention get the chance to be with some of the world’s top pedal-pushers.


“I want to observe their level of cycling and compare this from what I learned so far in my country. If given the chance, I will share this with my fellow Cebuanos, especially to the kids,” said Igimax before leaving for Spain.


No Pinoy or Cebuano in particular have been able to showcase its wares in any of the three grand tours in Europe—Tour de France, Giro de Italia and Vuelta a España nor has one ever climbed a podium in a World Junior Cycling Championships as well as no Pinoy cyclist has won an Olympic medal yet.

The trip could be Igimax’s motivation to train harder and be the first Cebuano to join these grand Tours, the World Championships and in the Olympics.


Whatever he “discovers”, Igimax hopes to get an answer whether to continue cycling in college or simply focus on studies soon.


If time permits, Igimax also hopes to experience Spanish football, his other sport by watching scrimmages of Barcelona FC and Real Madrid or even just to visit their stadiums. — THE FREEMAN
at 7:48 AM