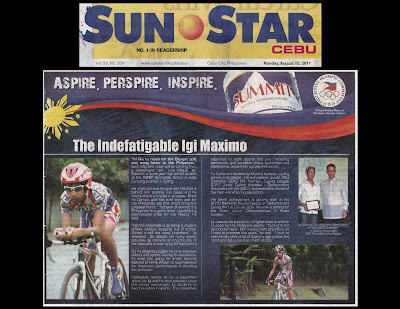 "I'd like to reach for the Olympic gold and bring honor to the Philippines," such a lofty and noble words coming from a sixteen year old!  Luis Miguel "Igi" Maximo, a fourth year high school student at the PAREF Springdale School is avidly pursuing a career in cycling.

He might achieve his goal yet!  His Dad is behind him plotting out dates and he knows this is a long term process.  Since no Olympic gold has ever been won for the Philippines yet, this might bring the greatest honor.  "I dream of winning the Philippines' first gold medal.  I would bring international pride for the Filipino." he said.

"Yet the emphasis is on being a student athlete without dropping out of school.  School is still the most important." Igi stresses.  So despite his many sports activities, Igi remains among the top of his class and is even vying for top honors.

So he deligently juggles his time between school and sports, aiming for excellence.  To keep him going, he drinks Summit Natural Drinking Water to stay hydrated for maximum performance in handling the pressure.

Springdale seems to be a supportive venue for Igi and his dual passions since the school encourages its students to become active in sports.  The school has expanded to eight sports this year, including taekwondo, golf, scrabble, chess, badminton and table tennis, aside from cycling and soccer.

His latest achievement is placing sixth in the 2010 Redlands Bicycle Classic in California and joining the L.A. Circuit, U.S.A.  Now he is aiming for the Asian Junior Championships in Kuala Lumpur.

Igi extends his passion to a higher level, to a form of vision for Philippine Sports.  "Cycling is not yet popular here.  Not many juniors are into it, so I hope to promote the sport," he said.  "I wish to see the day when a lot of boys my age pursue the sport and get to live it as much as I do."
at 7:37 AM