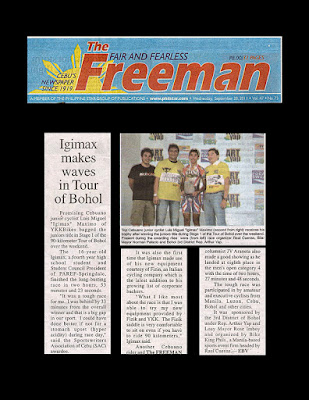 Published in The Freeman Newspaper on September 28, 2011 Wed issue
by Emmanuel B. Villaruel, Sports Editor


"It was a tough race for me. I was behind by 33 minutes from the overall winner and that is a big gap in our sport. I could have done better if not for a stomach upset (hyper acidity) during race day," said the Sportswriters Association of Cebu (SAC) awardee.


It was also the first time that Igimax made use of his new equipment courtesy of Fizik, an Italian cycling company which is the lalest addition to his growing list of corporate backers.


"What I like most about the race is that I was able to try my new equipment provided by Fizik and YKK. The Fizik saddle is very comfortable to sit on even if you have to ride 90 kilometers," Igimax said.


Another Cebuano rider and The Freeman columnist JV Araneta also made a good showing as he landed at eighth place in the men's open category 4 with the time of two hours, 27 minutes and 48 seconds.
-
The tough race was participated in by amateur and executive cyclists from Manila, Luzon, Cebu, Bohol and other cities.


It was sponsored by the 3rd District of Bohol under Rep. Arthur Yap and Loay Mayor Rose Imboy and organized by Bike King Phils., a Manila-based sports event firm headed by Raul Cuevas.— (FREEMAN)
at 5:24 AM