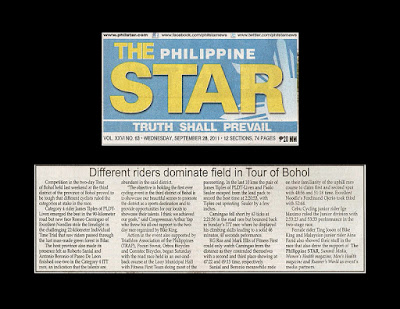 Published in The Philippine Star Newspaper on Sept. 28, 2011 Wed issue

MANILA, Philippines - Competition in the two-day Tour of Bohol held last weekend at the third district of the province of Bohol proved to be tough that different cyclists ruled the categories at stake in the race.


Category 4 rider James Tiples of PLDT-Liven emerged the best in the 90-kilometer road but new face Romeo Camingao of Excellent Noodles stole the limelight in the challenging 22-kilometer Individual Time Trial that saw riders passed through the lust man-made green forest in Bilar.


The host province also made its presence felt as Roberto Sanial and Antonio Beronio of Paseo De Loon finished one-two in the Category 4 ITT race, an indication that the talents are abundant in the said district.


“The objective in holding the first ever cycling event in the third district of Bohol is to showcase our beautiful scenes to promote the district as a sports destination and to provide opportunities for our locals to showcase their talents. I think we achieved our goals,” said Congressman Arthur Yap who threw his all-out support to the two-day race organized by Bike King.


Action in the event also supported by Triathlon Association of the Philippines (TRAP), Pocari Sweat, Orbea Bicycles and Corratec Bicycles, began Saturday with the road race held in an out-and-back course at the Loay Municipal Hall with Fitness First Team doing most of the pacesetting. In the last 10 kms the pair of James Tiples of PLDT-Liven and Paolo Sauler escaped from the lead pack to record the best time at 2:20:53, with Tiples out sprinting Sauler by a few inches.


Camingao fell short by 63 ticks at 2:21:56 in the road race but bounced back in Sunday’s ITT race where he displayed his climbing skills leading to a solid 46 minutes, 40 seconds peformance.


RG Roa and Mark Ellis of Fitness First could only watch Camingao from the distance as they contended themselves with a second and third place showing at 47:22 and 49:13 time, respectively.

Sanial and Beronio meanwhile rode on their familiarity of the uphill race course to claim first and second spot with 48:56 and 51:18 time. Excellent Noodle’s Ferdinand Ojerio took third with 52:44.