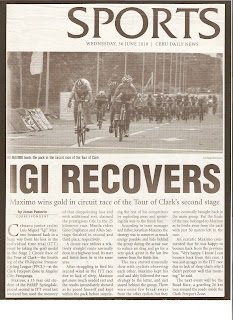 Cebuano junior cyclist Luis Miguel “Igi” Maximo bounced back in a huge way from his loss in the individual time trial (ITT) event by taking the gold medal in the Stage 2 Circuit Race of the Tour of Clark—the fourth leg of the Philippine Premier Cycling League (PPCL)—at the Clark Freeport Zone in Angeles City, Pampanga.
Maximo, a 15 year old student of the PAREF Springdale, placed second in ITT event last weekend but used the memory of that disppointing loss and with additional rest, claimed the prestigious title in the 25 kilometer race. Manila riders Gino Ongkiatco and Allen Santiago finished in second and third place, respectively.
A circuit race utilizes a relatively straight route normally done in a highway road. Its start and finish lines lie in the same area.
After struggling to find his second wind in the ITT race due to lack of sleep, Maximo got some much needed rest and the results immediately showed as he paced himself and kept within the pack before surprising the rest of his competitors by exploding away and sprinting his way to the finish line.
According to team manager and father, Jonathan Maximo, the strategy was to conserve as much energy possible and hide behind the group during the actual race to reduce air drag and go for a very quick sprint in the last few meters from the finish line.
The race started unusually slow with cyclists observing each other. Maximo kept his cool and ably followed the race strategy to the letter, and just stayed behind the group. There were some few break-aways from the other cyclists but they were eventually brought back in the main group. But the finale of the race belonged to Maximo as he broke away from the pack with just 50 meters left in the race.
An ecstatic Maximo commented that he was happy to bounce back from the previous loss. “Very happy. I know I can bounce back from this race. I was just groggy in the ITT race due to lack of sleep that’s why I didn’t perform well this morning,” he said.
The next event will be the Road Race, a grueling 26 km race around the roads inside the Clark Freeport Zone.
at 3:30 PM