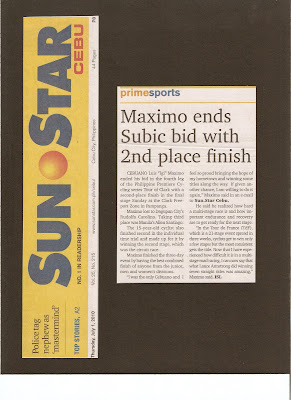 CEBUANO Luis “Igi” Maximo ended his bid in the fourth leg of the Philippine Premiere Cycling series Tour of Clark with a second-place finish in the final stage Sunday at the Clark Freeport Zone in Pampanga.
Maximo lost to Dagupan City’s Rudolfo Carolino. Taking third place was Manila’s Allen Santiago.
The 15-year-old cyclist also finished second in the individual time trial and made up for it by winning the second stage, which was the circuit race.
Maximo finished the three-day event by having the best combined finish of anyone from the junior, men and women’s divisions.
“I was the only Cebuano and I feel so proud bringing the hope of my hometown and winning some titles along the way. If given another chance, I am willing to do it again,” Maximo said in an e-mail to Sun.Star Cebu.
He said he realized how hard a multi-stage race is and how important endurance and recovery are to get ready for the next stage.
“In the Tour de France (TdF), which is a 21-stage event spread in three weeks, cyclists get to win only a few stages but the most consistent gets the title. Now that I have experienced how difficult it is in a multi-stage road racing, I can now say that what Lance Armstrong did winning seven straight titles was amazing,” Maximo said.
Published in the Sun.Star Cebu newspaper on July 1, 2010.
at 9:21 PM