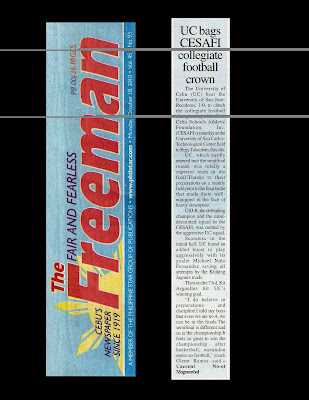 
CEBU, Philippines – The University of Cebu (UC) beat the University of San Jose-Recoletos, 1-0, to clinch the collegiate football championship of the 2010 Cebu Schools Athletic Foundation, Inc. (CESAFI) yesterday at the University of San Carlos-Technological Center field in Brgy.Talamban, this city.
UC, which hardly entered into the semifinal round, was totally a superior team in the final.Thanks to their preparations on a muddy field prior to the final battle that made them well-equipped in the face of heavy downpour.
USJ-R, the defending champion and the most-decorated squad in the CESAFI, was melted by the aggressive UC squad.
Scoreless in the initial half, UC found an added boost to play aggressively with its goalie Michael Niño Fernandez saving all attempts by the Kicking Jaguars made.
Then on the 73rd, Kit Arguelles hit UC's winning goal.
"I do believe in preparations and discipline.I told my boys that even we are no.4, we can be in the finals.The semifinal is different and so is the championship.It feels so great to win the championship after basketball, nasundan namo sa football," coach Glenn Ramos said. (FREEMAN)
at 6:07 AM