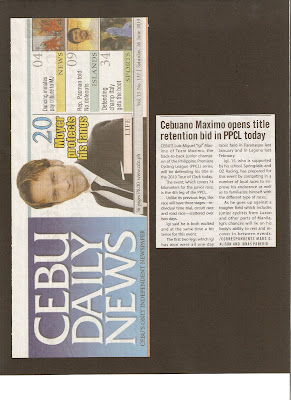 CEBU’S Luis Miguel "Igi" Maximo of Team Maximo, the back-to-back junior champion of the Philippine Premiere Cycling League (PPCL) series, will be defending his title in the 2010 Tour of Clark today.
The event, which covers 74 kilometers for the junior race, is the 4th leg of the PPCL.
Unlike its previous legs, this race will have three stages—individual time trial, circuit race and road race—scattered over two days.
Igi said he is both excited and at the same time a bit tense for this event.
The first two legs which Igi has won were all one-day races held in Paranaque last January and in Laguna last February.
Igi, 15, who is supported by his school, Springdale, and OZ Racing, has prepared for this event by competing in a number of local races to improve his endurance as well as to familiarize himself with the different type of races.
As he goes up against a tougher field which includes junior cyclists from Luzon and other parts of Manila, Igi's chances will lie on his body's ability to rest and recover in between events. /CORRESPONDENTs MARS G. ALISON and Jonas Panerio
at 7:09 PM