IGI FINISHES IN 2ND PLACE IN ITT OF TOUR OF CLARK 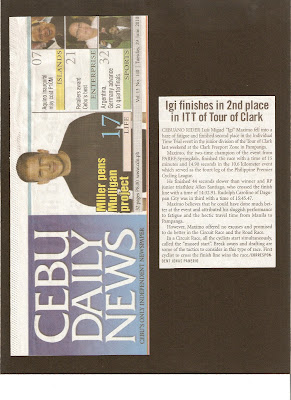 CEBUANO RIDER Luis Miguel “Igi” Maximo fell into a haze of fatigue and finished second place in the Individual Time Trial event in the junior division of the Tour of Clark last weekend at the Clark Freeport Zone in Pampanga.
Maximo, the two-time champion of the event from PAREF-Springdale, finished the race with a time of 15 minutes and 14.90 seconds in the 10.6 kilometer event which served as the fourt leg of the Philippine Premier Cycling League.
He finished 44 seconds slower than winner and RP junior triathlete Allen Santiago, who crossed the finish line with a time of 14:32.91. Rudolph Carolino of Dagupan City was in third with a time of 15:45.47.
Maximo believes that he could have done much better at the event and attributed his sluggish performance to fatigue and the hectic travel time from Manila to Pampanga.
However, Maximo offered no excuses and promised to do better in the Circuit Race and the Road Race.

In a Circuit Race, all the cyclists start simultaneously, called the “massed start”. Break aways and drafting are some of the tactics to consider in this type of race. First cyclist to cross the finish line wins the race. /Correspondent Jonas Panerio
at 5:25 AM