CEBU, Philippines - Noy Jopson and Lorhiz Echavez returned to the local scene with another powerful performance enroute to winning the Danao City Triathlon yesterday.
Jopson, who missed several tournaments here due to other events and priorities, topped the men’s open action in convincing fashion.
Elmo Clarabal trailed Jopson most of the time to grab the second place honors, while Ralph Arche finished third in the race that covered one kilometer swim, 30km bike and 7.5km run.
Echavez, on the other hand, seemed she was just having a regular training as she dominated the women’s division.
Arren Mendezona-Allegretti, who used to compete in triathlon alongside her sister Amale several years back, proved she's still a force to reckon with by finishing second, while Janice Bautista wound up third.
Mendel Lopez ruled the relay competition along with Ruben Pilapil.
Junior athletes Igi Maximo and Alex Qui from Paref-Springdale along with Felix Lopez, Mendel’s brother, stole part of the limelight by winding up third in the event, which was among the highlights of Danao City’s Charter Day celebration.
Maximo showcased his wares in biking, Qui did the swim, while Lopez took over in the running discipline. – THE FREEMAN 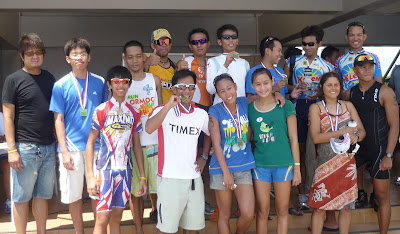 The different category winners led by Noy Jopson and Lorhiz Echavez pose for posterity during the awarding rites of the Danao City Triathlon yesterday.  With them is event organizer and Danao City Councilor Oscar "Boying" Rodriguez, Jr.  CYRIL CAMPOREDONDO.  (Photo published in The Freeman Newspaper June 7, 2010 Monday issue).
at 5:52 AM