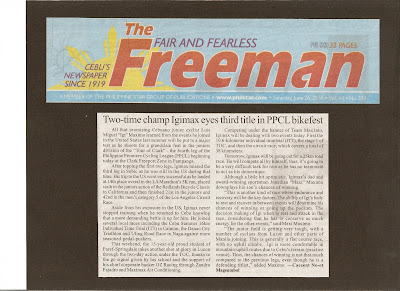 CEBU, Philippines - All that promising Cebuano junior cyclist Luis Miguel “Igi” Maximo learned from the events he joined in the United States last summer will be put to a major test as he shoots for a grandslam feat in the juniors division of the “Tour of Clark” - the fourth leg of the Philippine Premiere Cycling League (PPCL) beginning today at the Clark Freeport Zone in Pampanga.
After topping the first two legs, Igimax missed the third leg in Subic as he was still in the US during that time. His trip to the US went very successful as he landed at 14th place overal in the LA Marathon’s 5K run, placed sixth in the juniors action of the Redlands Bicycle Classic in California and then finished 21st in the juniors and 42nd in the men’s category 5 of the Los Angeles Circuit Race.
Aside from his exposure in the US, Igimax never stopped training when he returned to Cebu knowing that a more demanding battle is up for him. He joined several local races including the Cebu Summer 16km Individual Time Trial (ITT) in Catmon, the Danao City Triathlon and Uling Road Race in Naga against more seasoned pedal-pushers.
This weekend, the 15-year-old proud student of Paref-Springdale takes another shot at glory in Luzon through the two-day action under the TOC, thanks to the go signal given by his school and the support of his chief corporate backer OZ Racing through Zandro Fajadro and Maximax Air Conditioning.
Competing under the banner of Team Max1mo, Igimax will be dealing with two events today. First the 10.6-kilometer individual time trial (ITT), the stage 1 of TOC, and then the circuit race, which covers a total of 38 kilometers.
Tomorrow, Igimax will be going out for a 25km road race. He will compete all by himself, thus, it’s going to be a very difficult task for him as he has no teammate to act as his domestique.
Although a little bit optimistic, Igimax’s dad and award-winning sportsman Jonathan “Maxi” Maximo downplays his son’s chances of winning.
“This is another kind of race where endurance and recovery will be the key factors. The ability of Igi’s body to rest and recover in between events will determine his chances of winning or going up the podium. The decision making of Igi when to rest and attack in the race, considering that he has to conserve as much energy for the other events,” said Maxi Maximo.
“The junior field is getting very tough, with a number of cyclists from Luzon and other parts of Manila joining. This is generally a flat course race, with no uphill climbs. Igi is more comfortable in mountain/uphill routes due to Cebu’s terrain (practice venue). Thus, the chances of winning is not that much compared to the previous legs, even though he is a defending titlist,” added Maximo. (FREEMAN NEWS)
at 5:47 AM