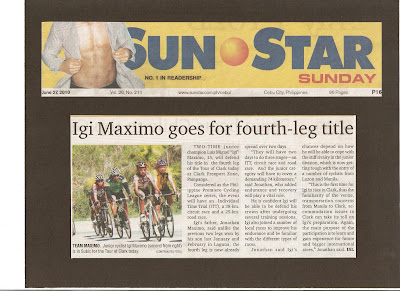 
TWO-TIME junior champion Luis Miguel “Igi” Maximo, 15, will defend his title in the fourth leg of the Tour of Clark today at Clark Freeport Zone, Pampanga.
Considered as the Philippine Premiere Cycling League series, the event will have an Individual Time Trial (ITT), a 38-km. circuit race and a 25-km. road race.
Igi’s father, Jonathan Maximo, said unlike the previous two legs won by his son last January and February in Laguna, the fourth leg is now already spread over two days.
“They will have two days to do three stages—an ITT, circuit race and road race. And the junior category will have to cover a demanding 74 kilometers,” said Jonathan, who added endurance and recovery will play a vital role.
He is confident Igi will be able to be defend his crown after undergoing several training sessions. Igi also joined a number of local races to improve his endurance and be familiar with the different types of races.
Jonathan said Igi’s chances depend on how he will be able to cope with the stiff rivalry in the junior division, which is now getting tough with the entry of a number of cyclists from Luzon and Manila.
“This is the first time for Igi to race in Clark, thus the familiarity of the venue, transportation concerns from Manila to Clark, accommodation issues in Clark can take its toll on Igi’s preparation. Again, the main purpose of the participation is to learn and gain experience for future and bigger international races,” Jonathan said.
Published in the Sun.Star Cebu newspaper on June 27, 2010.
at 6:42 AM