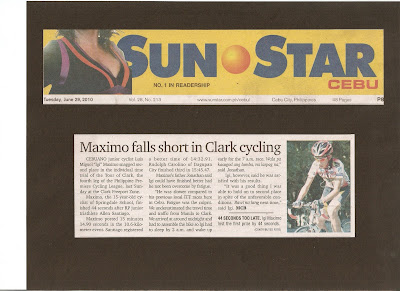 "He was slower compared to his previous local ITT races here in Cebu. Fatigue was the culprit. We underestimated the travel time and traffic from Manila to Clark. We arrived at around midnight and had to assemble the bike so Igi had to sleep by 2 a.m. and wake up early for the 7 a.m. race. Wala pa kasugod ang lumba, na laspag na," said Jonathan.
Igi, however, said he was satisfied with his results.

"It was a good thing I was able to hold on to second place in spite of the unfavorable conditions. Bawi na lang next time," said Igi.
at 5:00 AM