IGI TO VIE IN XTERRA TRIATHLON 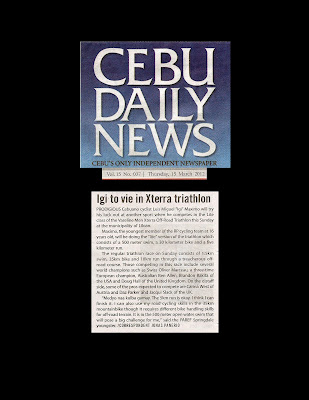 
PRODIGIOUS Cebuano cyclist Luis Miguel "Igi" Maximo will try his luck out at another sport when he competes in the Lite class of the Vaseline Men Xterra Off-Road Triathlon this Sunday at the municipality of Liloan.


Maximo, the youngest member of the RP cycling team at 16 years old, will be doing the "lite" version of the triathlon which consists of a 500 meter swim, a 30 kilometer bike and a five kilometer run.


The regular triathlon race on Sunday consists of a 1.5km swim, 35km bike and 10km run through a treacherous off-road course.  Those competing in this race include several world champions such as Swiss Oliver Marceau, a three-time European champion, Australian Ben Allen, Brandon Rakita of the USA and Doug Hall of the United Kingdom.  On the distaff side, some of the pros expected to compete are Carina West of Austria and Daz Parker and Jacqui Slack of the UK.


"Medyo naa kulba gamay.  The 5km is okay.  I think I can finish it.  I can also use my road cycling skills in the 35km mountainbike though it requires different bike handling skills for off-road terrain.  It is in the 500 meter open water swim that will pose a big challenge for me," said the PAREF Springdale youngster./CORRESPONDENT JONAS PANERIO
at 6:09 PM