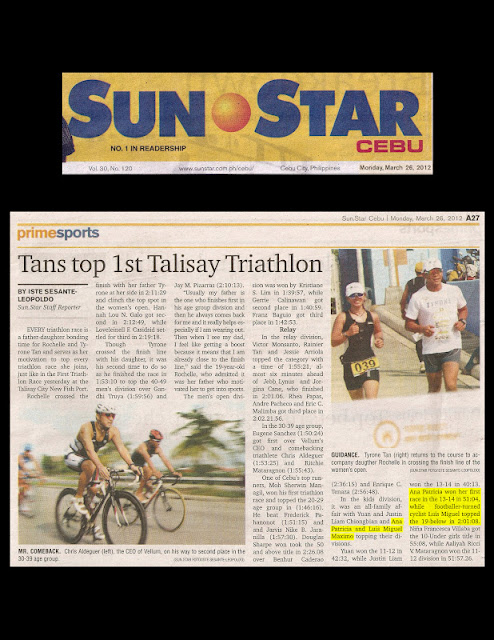 EVERY triathlon race is a father-daughter bonding time for Rochelle and Tyrone Tan and serves as her motivation to top every triathlon race she joins, just like in the First Triathlon Race yesterday at the Talisay City New Fish Port.


Rochelle crossed the finish with her father Tyrone at her side in 2:11:29 and clinch the top spot in the women’s open. Hannah Lou N. Galo got second in 2:12:49, while Loveleinell F. Casidsid settled for third in 2:19:18.


“Usually my father is the one who finishes first in his age group division and then he always comes back for me and it really helps especially if I am wearing out. Then when I see my dad, I feel like getting a boost because it means that I am already close to the finish line,” said the 19-year-old Rochelle, who admitted it was her father who motivated her to get into sports.


In the relay division, Victor Monsanto, Rainier Tan and Jessie Arriola topped the category with a time of 1:55:21, almost six minutes ahead of Jebb Lynus and Jorgina Cane, who finished in 2:01.06. Rhea Papas, Andre Pacheco and Eric C. Malimba got third place in 2:02.21.56.


In the kids division, it was an all-family affair with Yuan and Justin Liam Chiongbian and Ana Patricia and Luis Miguel Maximo topping their divisions.