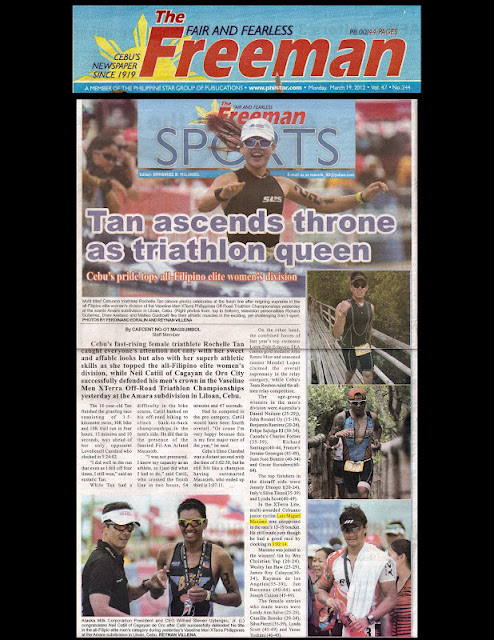 CEBU, Philippines - Cebu's fast-rising female triathlete Rochelle Tan caught everyone's attention not only with her sweet and affable looks but also with her superb athletic skills as she topped the all-Filipino elite women's division, while Neil Catiil of Cagayan de Oro City successfully defended his men's crown in the Vaseline Men XTerra Off-Road Triathlon Championships yesterday at the Amara subdivision in Liloan, Cebu.


The 18-year-old Tan finished the grueling race consisting of 1.5-kilometer swim, 30K bike and 10K trail run in four hours, 15 minutes and 10 seconds, way ahead of her only opponent Lovelienell Casidsid who clocked in 5:24:02.


“I did well in the run that even as I fell off four times, I still won,” said an ecstatic Tan.

While Tan had a difficulty in the bike course, Catiil banked on his off-road biking to clinch back-to-back championships in the men's side. He did that in the presence of the fancied Fil-Am Arland Macasieb.


“I was not pressured. I know my capacity as an athlete, so I just did what I had to do,” said Catiil, who crossed the finish line in two hours, 54 minutes and 47 seconds.


Had he competed in the pro category, Catiil would have been fourth overall. "Or couse I'm very happy because this is my first major race of the year," he said.


Cebu’s Elmo Clarabal was a distant second with the time of 3:02:38, but he still felt like a champion having outsmarted Macasieb, who ended up third in 3:07:11.


In the XTerra Lite, multi-awarded Cebuano junior cyclist Luis Miguel Maximo was unopposed in the men’s 15-19 bracket. He still made sure though he had a good race by clocking in 3:02:14.