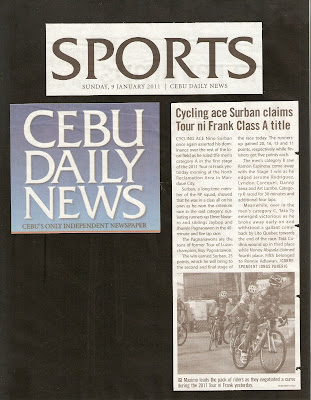 
CYCLING ACE Nino Surban once again asserted his dominance over the rest of the local field as he ruled the men's category A in the first stage of the 2011 Tour ni Frank yesterday morning at the North Reclamation Area in Mandaue City.


Surban, a long-time member of the RP squad, showed that he was in a class all on his own as he won the criterium race in the said category, outlasting runners-up Elmer Navarro and siblings Jaybop and Jhunvie Pagnanawon in the 40-minute and five lap race.
The Pagnanawons are the sons of former Tour of Luzon champion, Boy Pagnanawon.
The win earned Surban, 25 points, which he will bring to the second and final stage of the race today. The runners-up gained 20, 16, 13 and 11 points, respectively while finishers got five points each.
The men's category B saw Ramon Espinosa come away with the Stage 1 win as he edged Jerome Rodriguez, Lyndon Carequel, Danny Sena and Art Lambo. Category B raced for 30 minutes and additional four laps.
Meanwhile, over in the men's category C, Tata Ty emerged victorious as he broke away early on and withstood a gallant comeback by Lito Quebec towards the end of the race. Tata Codina wound up in third place while Nonoy Abasola claimed fourth place. Fifth belonged to Ronnie Adlawan. /Correspondent Jonas Panerio 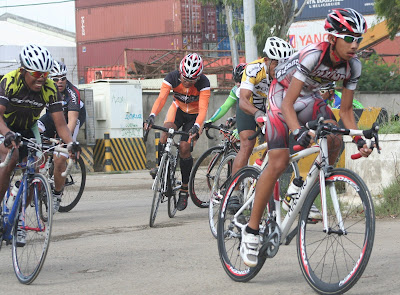 IGI Maximo leads the pack of riders as they negotiated a curve during the 2011 Tour ni Frank yesterday. (Published in Cebu Daily News on Jan. 9, 2011 Sunday issue)
at 9:00 PM