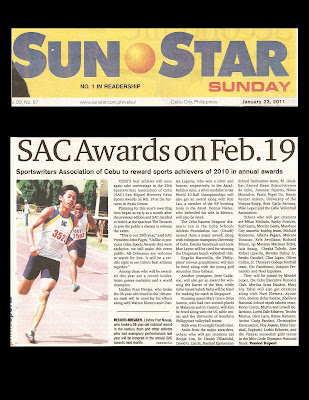 Click to enlarge
Published in Sun Star Cebu Newspaper on Jan. 23, 2011 Sunday issue
by Pooled Report
Mike Limpag, Sports Editor
CEBU’S best athletes will once again take centerstage in the 29th Sportswriters Association of Cebu (SAC)-San Miguel Brewery Cebu Sports Awards on Feb. 19 at the Terraces in Ayala Center.
Planning for this year’s awarding rites began as early as a month after the previous edition and SAC decided to hold it at the spacious The Terraces to give the public a chance to witness the event.
“This is our 29th year,” said SAC President John Pages. “Unlike in previous Cebu Sports Awards that were exclusive, we will make this event public. All Cebuanos are welcome to watch for free. It will be a terrific sight to see Cebu’s best athletes together.”
Among those who will be awarded this year are a record holder, Asian games medalists and a world champion.
Lindley Fran Navaja, who broke the 38-year-old record in the 100-meter dash will be cited for his efforts along with Warren Kiamco and Charlea Lagaras, who won a silver and bronze, respectively, in the Asiad. Rubilen Amit, a silver medalist in the World 10-Ball championships will also get an award along with Kim Lao, a member of the RP bowling team in the Asiad. Donnie Nietes, who defended his title in Mexico, will also be feted.
The Cebu Eastern Dragons’ dramatic run in the Cebu Schools Athletic Foundation, Inc. (Cesafi) earned them a major award, along with collegiate champions University of Cebu. Danika Gendrauli and Lorie Mae Layno will be cited for winning the Unigames beach volleyball title.
Rogelio Barcenilla, the Philippines’ newest grandmaster, will also be feted along with the young golf sensation Irina Gabasa.
Another youngster, Jette Calderon, will also get an award for winning the Karter of the Year, while Cebu-based Sabah Fadai will be feted for making his mark in Singapore.
Running queen Mary Grace delos Santos, who had two second-places in Malaysia and in Camsur, will also be feted along with the UC table tennis and the University of Southern Philippines volleyball teams.
Both won 10 straight Cesafi titles.