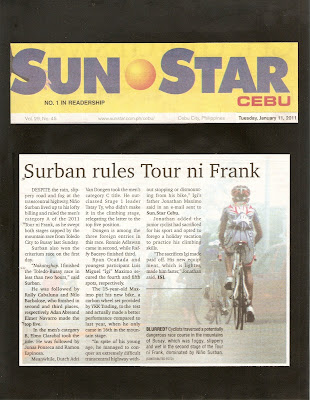 DESPITE the rain, slippery road and fog at the transcentral highway, Niño Surban lived up to his lofty billing and ruled the men’s category A of the 2011 Tour ni Frank, as he swept both stages capped by the mountain race from Toledo City to Busay last Sunday.
Surban also won the criterium race on the first day.
“Nakataghap. I finished the Toledo-Busay race in less than two hours,” said Surban.
He was followed by Rolly Cabaluna and Nilo Barbalose, who finished in second and third places, respectively. Adan Abreand Elmer Navarro made the top five.
In the men’s category B, Elmo Clarabal took the title. He was followed by Jonas Ponseca and Ramon Espinosa.
Meanwhile, Dutch Adri Van Dongen took the men’s category C title. He outclassed Stage 1 leader Tatay Ty, who didn’t make it in the climbing stage, relegating the latter to the top five position.
Dongen is among the three foreign entries in this race. Ronnie Adlawan came in second, while Raffy Bacayo finished third.
Ryan Ocañada and youngest participant Luis Miguel “Igi” Maximo secured the fourth and fifth spots, respectively.
The 15-year-old Maximo put his new bike, a carbon wheel set provided by YKK Trading, to the test and actually made a better performance compared to last year, when he only came in 16th in the mountain stage.
“In spite of his young age, he managed to conquer an extremely difficult transcentral highway without stopping or dismounting from his bike,” Igi’s father Jonathan Maximo said in an e-mail sent to Sun.Star Cebu.
Jonathan added the junior cyclist had sacrificed for his sport and opted to forego a holiday vacation to practice his climbing skills.
“The sacrifices Igi made paid off. His new equipment, which is lighter, made him faster,” Jonathan said. 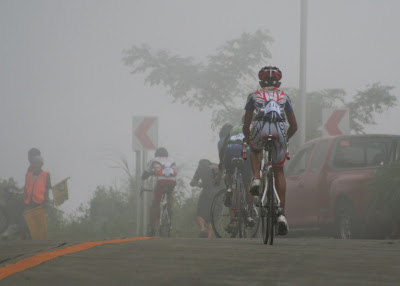 BLURRED?  Cyclists traversed a potentially dangerous race course in the mountains of Busay, which was foggy, slippery and wet in the second stage of the Tour ni Frank, dominated by Nino Surban. (Photo published in Sun Star Cebu Newspaper on Jan. 11, 2010 Tuesday issue)
at 6:05 AM