IGI MAXIMO TO RACE IN TOUR OF JALA-JALA 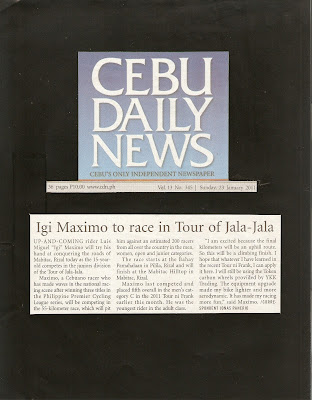 UP-AND-COMING rider Luis Miguel “Igi” Maximo will try his hand at conquering the roads of Mabitac, Rizal today as the 15-year-old competes in the juniors division of the Tour of Jala-Jala.
Maximo, a Cebuano racer who has made waves in the national racing scene after winning three titles in the Philippine Premier Cycling League series, will be competing in the 55-kilometer race, which will pit him against an estimated 200 racers from all over the country in the men, women, open and junior categories.
The race starts at the Bahay Pamahalaan in Pilila, Rizal and will finish at the Mabitac Hilltop in Mabitac, Rizal.
Maximo last competed and placed fifth overall in the men's category C in the 2011 Tour ni Frank earlier this month. He was the youngest rider in the adult class.
“I am excited because the final kilometers will be an uphill route. So this will be a climbing finish. I hope that whatever I have learned in the recent Tour ni Frank, I can apply it here. I will still be using the Token carbon wheels provided by YKK Trading. The equipment upgrade made my bike lighter and more aerodynamic. It has made my racing more fun,” said Maximo. /Correspondent Jonas Panerio
at 3:02 PM