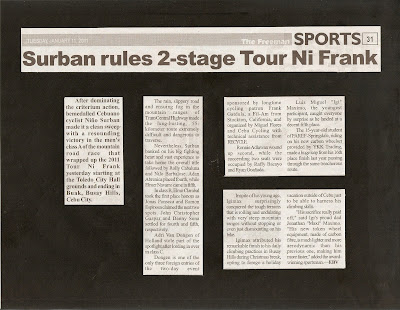 CEBU, Philippines - After dominating the criterium action, bemedalled Cebuano cyclist Niño Surban made it a clean sweep with a resounding victory in the men's class A of the mountain road race that wrapped up the 2011 Tour Ni Frank yesterday starting at the Toledo City Hall grounds and ending in Buak, Busay Hills, Cebu City.
The rain, slippery road and ensuing fog in the mountain ranges of TransCentral Highway made the lung-busting, 55-kilometer route extremely difficult and dangerous to traverse.
Nevertheless, Surban banked on his big fighting heart and vast experience to take home the overall title followed by Rolly Cabaluna and Nilo Barbalose. Adan Abrenica placed fourth, while Elmer Navarro came in fifth.
In class B, Elmo Clarabal took the first place honors as Jonas Ponseca and Ramon Espinosa claimed the next two spots. John Christopher Gaspar and Danny Sena settled for fourth and fifth, respectively.
Adri Van Dongen of Holland stole part of the spotlight after lording in over in class C.
Dongen is one of the only three foreign entries of the two-day event sponsored by longtime cycling patron Frank Gatdula, a Fil-Am from Stockton, California, and organized by Miguel Flores and Cebu Cycling with technical assistance from RECYCLE.
Ronnie Adlawan wound up second, while the succeeding two seats were occupied by Raffy Bacayo and Ryan Ocañada.
Luis Miguel "Igi" Maximo, the youngest participant, caught everyone by surprise as he landed at a decent fifth place.
The 15-year-old student of PAREF-Springdale, riding on his new carbon wheelset provided by YKK Trading, made a huge leap from his 16th place finish last year passing through the same treacherous route.
Inspite of his young age, Igimax surprisingly conquered the tough terrains that is rolling and undulating with very steep mountain ranges without stopping or even just dismounting on his bike.
Igimax attributed his remarkable finish to his daily climbing practices in Busay Hills during Christmas break, opting to forego a holiday vacation outside of Cebu just to be able to harness his climbing skills.
"His sacrifice really paid off," said Igi's proud dad Jonathan "Maxi" Maximo. "His new token wheel equipment, made of carbon fibre, is much lighter and more aerodynamic than his previous one, making him more faster," added the award-winning sportsman.
at 6:54 AM