WHEN LIFE HITS YOU HARD, HIT BACK HARDER 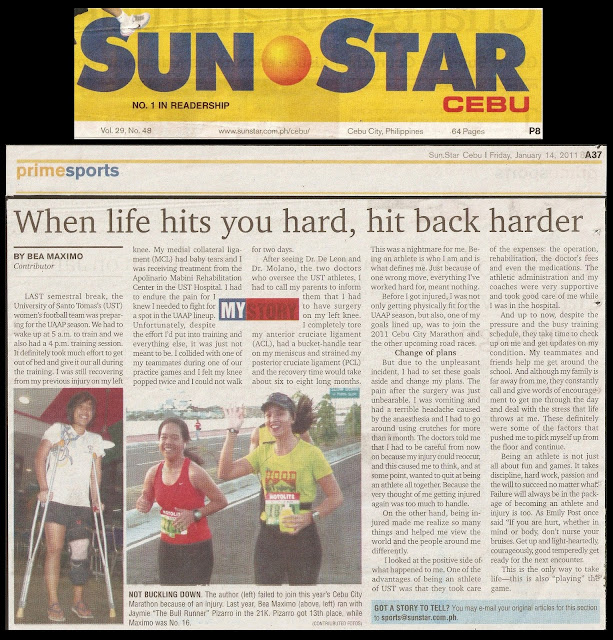 LAST semestral break, the University of Santo Tomas’s (UST) women’s football team was preparing for the UAAP season. We had to wake up at 5 a.m. to train and we also had a 4 p.m. training session. It definitely took much effort to get out of bed and give it our all during the training.


I was still recovering from my previous injury on my left knee. My medial collateral ligament (MCL) had baby tears and I was receiving treatment from the Apolinario Mabini Rehabilitation Center in the UST Hospital. I had to endure the pain for I knew I needed to fight for a spot in the UAAP lineup. Unfortunately, despite the effort I’d put into training and everything else, it was just not meant to be. I collided with one of my teammates during one of our practice games and I felt my knee popped twice and I could not walk for two days.


After seeing Dr. De Leon and Dr. Molano, the two doctors who oversee the UST athletes, I had to call my parents to inform them that I had to have surgery on my left knee.

I completely tore my anterior cruciate ligament (ACL), had a bucket-handle tear on my meniscus and strained my posterior cruciate ligament (PCL) and the recovery time would take about six to eight long months. This was a nightmare for me. Being an athlete is who I am and is what defines me. Just because of one wrong move, everything I’ve worked hard for, meant nothing.

Before I got injured, I was not only getting physically fit for the UAAP season, but also, one of my goals lined up, was to join the 2011 Cebu City Marathon and the other upcoming road races.


But due to the unpleasant incident, I had to set these goals aside and change my plans. The pain after the surgery was just unbearable. I was vomiting and had a terrible headache caused by the anaesthesia and I had to go around using crutches for more than a month. The doctors told me that I had to be careful from now on because my injury could reoccur, and this caused me to think, and at some point, wanted to quit at being an athlete all together. Because the very thought of me getting injured again was too much to handle.


On the other hand, being injured made me realize so many things and helped me view the world and the people around me differently.


I looked at the positive side of what happened to me. One of the advantages of being an athlete of UST was that they took care of the expenses: the operation, rehabilitation, the doctor’s fees and even the medications. The athletic administration and my coaches were very supportive and took good care of me while I was in the hospital.


And up to now, despite the pressure and the busy training schedule, they take time to check up on me and get updates on my condition. My teammates and friends help me get around the school. And although my family is far away from me, they constantly call and give words of encouragement to get me through the day and deal with the stress that life throws at me. These definitely were some of the factors that pushed me to pick myself up from the floor and continue.


Being an athlete is not just all about fun and games. It takes discipline, hard work, passion and the will to succeed no matter what. Failure will always be in the package of becoming an athlete and injury is too. As Emily Post once said “If you are hurt, whether in mind or body, don’t nurse your bruises. Get up and light-heartedly, courageously, good temperedly get ready for the next encounter.

This is the only way to take life—this is also “playing” the game. 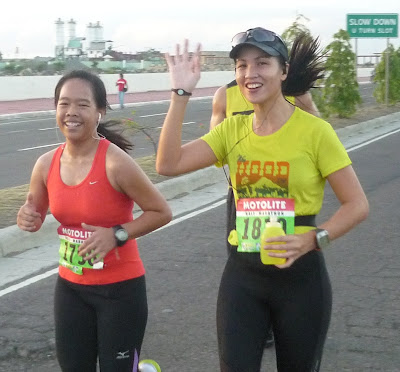 NOT BUCKLING DOWN.  The author (below) failed to join this year's Cebu City Marathon because of an injury.  Last year, Bea Maximo (above, left) ran with Jaymie "The Bull Runner" Pizarro in the 21K.  Pizarro got 13th place, while Maximo was No. 16. 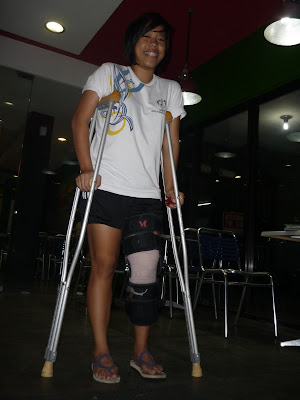 Max, thanks for sharing! Hope all is well with you.

Bea! I'm so sorry to hear about your injury, but I'm also glad to hear that you're being the fighter that you are. I'm sure you'll be back on the field (and the road) in no time, even better and stronger than you were! Keep in touch! P.S. You've grown so fast the past year!