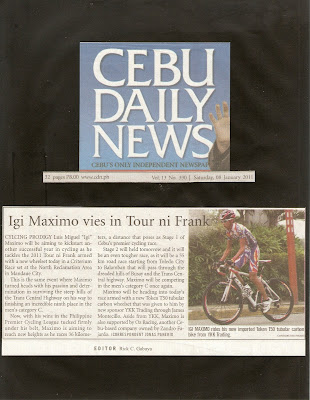 CYLCING PRODIGY Luis Miguel “Igi” Maximo will be aiming to kickstart another successful year in cycling as he tackles the 2011 Tour ni Frank armed with a new wheelset today in a Criterium Race set at the North Reclamation Area in Mandaue City.
This is the same event where Maximo turned heads with his passion and determination in surviving the steep hills of the Trans Central Highway on his way to finishing an incredible ninth place in the men's category C.
Now, with his wins in the Philippine Premier Cycling League tucked firmly under his belt, Maximo is aiming to reach new heights as he races 36 kilometers, a distance that poses as Stage 1 of Cebu's premier cycling race.
Stage 2 will held tomorrow and it will be an even tougher race, as it will be a 55 km road race starting from Toledo City to Balamban that will pass through the dreaded hills of Busay and the Trans Central highway. Maximo will be competing in the men's category C once again.
Maximo will be heading into today's race armed with a new Token T50 tubular carbon wheelset that was given to him by new sponsor YKK Trading through James Montecillo. Aside from YKK, Maximo is also supported by Oz Racing, another Cebu-based company owned by Zandro Fajardo. /Correspondent Jonas Panerio 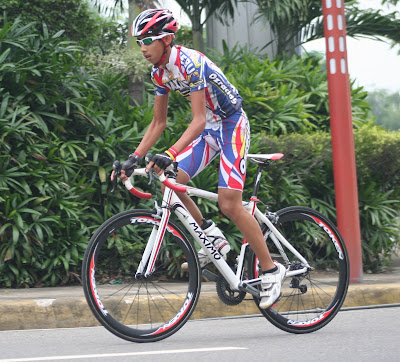