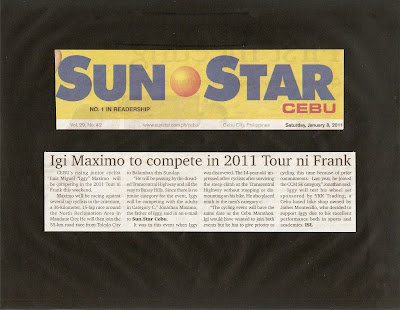 Click to enlarge
Published in Sun Star Newspaper on January 8, 2011 Saturday issue
by Iste S. Leopoldo, Staff Writer
Mike Limpag, Sports Editor
CEBU’s rising junior cyclist Luis Miguel “Igi” Maximo will be competing in the 2011 Tour ni Frank this weekend.
Maximo will be racing against several top cyclists in the criterium, a 36-kilometer, 15-lap race around the North Reclamation Area in Mandaue City. He will then join the 55-km road race from Toledo City to Balamban this Sunday.
“He will be passing by the dreaded Transcentral Highway and all the way to Busay Hills. Since there is no junior category for the event, Igi will be competing with the adults in Category C,” Jonathan Maximo, the father of Igi, said in an e-mail to Sun.Star Cebu.
It was in this event when Igi was discovered. The 14-year-old impressed other cyclists after surviving the steep climb at the Transcentral Highway without stopping or dismounting on his bike. He also placed ninth in the men’s category C.
“The cycling event will have the same date as the Cebu Marathon. Igi would have wanted to join both events but he has to give priority to cycling this time because of prior commitments. Last year, he joined the CCM 5K category,” Jonathan said.
Igi will test his wheel set sponsored by YKK Trading, a Cebu-based bike shop owned by James Montecillo, who decided to support Igi due to his excellent performance both in sports and academics.
at 6:04 AM